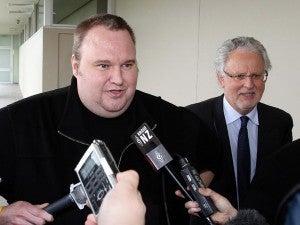 The colorful entrepreneur unveiled the “Mega” site ahead of a lavish gala and press conference planned at his New Zealand mansion on Sunday night, the anniversary of his arrest on racketeering charges related to his now-shuttered Megaupload file-sharing site. Megaupload, which Dotcom started in 2005, was one of the most popular sites on the web until U.S. prosecutors shut it down, accusing Dotcom and several company officials of facilitating millions of illegal downloads.

“As of this minute one year ago (hash)Megaupload was destroyed by the US Government. Welcome to http://Mega.co.nz,” Dotcom posted on his Twitter account as the new site went live. Within hours, Dotcom wrote, Mega had received 250,000 user registrations.

U.S. authorities are trying to extradite the German-born Internet tycoon from New Zealand, where he is free on bail. Prosecutors say Dotcom made tens of millions of dollars while filmmakers and songwriters lost around $500 million in copyright revenue.

Dotcom argues that he can’t be held responsible for copyright infringement committed by others, and insists Megaupload complied with copyrights by removing links to pirated material when asked.

“In the dark ages … the enemies of progress burned books,” Dotcom said last week at an Auckland ice cream shop, where he handed out ice cream cups, some bearing Willy Wonka-style golden tickets to his launch party. “And now today they are burning websites. And Mega is going to be the website that is going to end all of that.”

Mega, like Megaupload, allows users to store and share large files. It offers 50 gigabytes of free storage, much more than similar sites such as Dropbox and Google Drive, and features a drag-and-drop upload tool.

The key difference is an encryption and decryption feature for data transfers that Dotcom says will protect him from the legal drama that has entangled Megaupload and threatened to put him behind bars.

The decryption keys for uploaded files are held by the users, not Mega, which means the company can’t see what’s in the files being shared. Dotcom could then argue that Mega — which bills itself as “the privacy company” — can’t be held liable for content it cannot see.

“What he’s trying to do is give himself a second-string argument: ‘Even if I was wrong before, this one’s all right because how can I control something if I don’t know that it’s there?'” said Sydney attorney Charles Alexander, who specializes in intellectual property law. “I can understand the argument; whether it would be successful or not is another matter.”

U.S. prosecutors declined to comment on the new site, referring only to a court document that cites several promises Dotcom made while seeking bail that he would not — and could not — start a Megaupload-style business until the criminal case was resolved.

“I can assure the Court that I have no intention and there is no risk of my reactivating the Megaupload.com website or establishing a similar Internet-based business during the period until the resolution of the extradition proceedings,” Dotcom said in a Feb. 15, 2012, affidavit.

The Motion Picture Association of America, which filed complaints about alleged copyright infringement by Megaupload, was not impressed.

“We are still reviewing how this new project will operate, but we do know that Kim Dotcom has built his career and his fortune on stealing creative works,” the MPAA said in a statement. “We’ll reserve final judgment until we have a chance to take a closer look, but given Kim Dotcom’s history of damaging the consumer experience by pushing stolen, illegitimate content into the marketplace, count us as skeptical.”

Still, as much as Dotcom’s new venture might enrage prosecutors and entertainment executives, it shouldn’t have any impact on the Megaupload case.

“All it might do is annoy them enough to say, ‘We’re going to redouble our efforts in prosecuting them’,” said Alexander, the attorney. “But I don’t think it makes any practical difference to the outcome.”