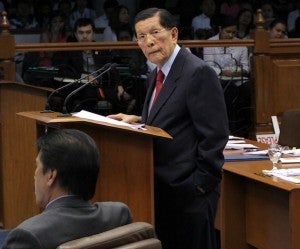 Even Twitter, supposed to travel faster than sound, got lost in the speed with which Senate President Juan Ponce Enrile on Monday shifted gears from “quitter” to “winner.”

In just about seven minutes,  Enrile declared his post vacant, called for a vote and, voilà, had himself securely fastened onto his seat as the third most powerful official in the land.

In a privilege speech that surprised many, Enrile  lashed at his “enemies”—including a newspaper that has the tagline “Balanced News, Fearless Views”—and declared the position of Senate president vacant. He also called for a vote.

Neil Noe Reyes, who used the handle @oehreyes, said he smelled the whole thing was “staged.”

“If JPE really wanted to declare the Senate presidency vacant, he should’ve have resigned irrevocably, not through a motion,” Reyes said.

“It must be fun for senators to watch Enrile literally grow old in that chair. Why else would they refuse to let him go?” former journalist Carlos Conde tweeted, using the name @carlosconde.

With the hashtags #Enrile, #JPE and #SenatePresident, Enrile became a trending topic as social media went abuzz about his motion to declare his post vacant and the decision of majority of the senators to reject the motion.

Some social media users immediately linked his move to the May 2013 elections and others saw it as a throwback to Enrile’s role as martial law administrator during the Marcos regime.

“So much effin’ drama in the Senate I am beginning to wonder if there is really honor among thieves,” tweeted user @ConoCabron.

“So much attention given to the cash gift, it’s interesting why no one has asked the same of the House, which gave P141 Million,”  said Gregorio Larrazabal, who used the name @GoYoLarrazabal.

“JPE reminds me of Tywin Lannister. You may not like him, but you gotta admire how he thinks.”

“Mr Enrile outsmarted President Marcos back in the day, so I suppose putting one over Mr Trillanes was mere child’s play to him,” tweeted @unlawyer.

User @jubeebs had a similar observation. “Enrile managed to stage his own assassination. Today’s show was more like a children’s school production,” he said.

Primo Morillo used Twitter to chide Enrile’s arch-critic Senator Antonio Trillanes IV, who had said the Senate President will be ousted by February. “Sabi dati, the threat is more powerful than the act. Well, not true re Trillanes threats against Enrile,”  he said, using the name  @freemorillo.

“Would JPE go through all the fuss just to one-up a junior Senator? Not the only reason. Something bigger at stake,” he tweeted, using the name @alcuinpapa.

Trust it to tweeps to create the apt hashtags to bundle similar topics, like #fakeAmbush, #patawa, #anghusayniJPE, #TeleseryeLevels, #gameofthrones and #JPEforStarMagic, to add to #cashgift and #enrilebonus, which have been in circulation since the Inquirer broke the story.

But it took Monmon Mojacko’s tweet to bring the issues back to Enrile’s original sin, which was the P1.6-million bonus he gave the senators.