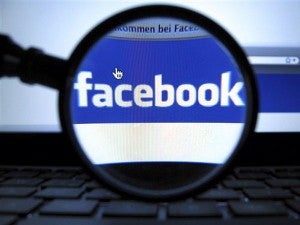 MANILA, Philippines—The government on Tuesday admitted before the Supreme Court that liking, sharing libelous Facebook and twitter posts can make one person criminally liable, prompting a Supreme Court Justice to say that it creates a chilling effect.

“It is not an excuse that thousands of defamatory statements are on the Internet. Then, we have to scrap the law,” Solicitor-General Francis Jardeleza said during Tuesday’s oral argument.

“Defamation is defamation whether we communicate through megaphones, letters, person to person, tweets, Facebook or e-mail,” Jardeleza added.

Associate Justice Roberto Abad said with the criminal liability that the Cybercrime Prevention Act of 2012 creates, “it will make me now reluctant to express my view.”

Abad likened liking and sharing of posts on Facebooks and twitters to showing a friend a libellous material posted on a bulletin board.

Jardeleza said, in that situation, there is no liability because it cannot be considered a republication.

“Unless this law is clarified, it has a chilling effect,” Abad said.

“What do we do? Until either this court says reputation is not a value anymore, this can be a difficult question,” he told Abad.

Another contentious provision of the Cybercrime Prevention Act,  Section 12 or the Collection of Traffic Data, was also tackled and government lawyers admitted before the SC that it is “barely constitutional.”

Section 12 of the law provides that “law enforcement authorities, with due cause, shall be authorized to collect or record by technical or electronic means traffic data in real-time associated with specified communications transmitted by means of a computer system.”

The same provision of the law provides that traffic data “refers only to the communication’s origin, destination, route, time, date, size, duration or type of underlying service but not content nor identities.”

During the questioning of Senior Associate Justice Antonio Carpio, Jardeleza said traffic data could include private data. However, he said it cannot be considered violation of the right to privacy since no court has declared it private.

Carpio asked Jardeleza if for example a police officer tries to get a traffic data about him, will he raise the defense of privacy?

“I cannot argue privacy because the data on phone is external data therefore, that is not covered by privacy…Taking as instructive the experience in the US, in that jurisdiction, traffic data can be exercised if the trigger is a Federal State attorney,” Jardeleza said.

“But here any police can do it,” Carpio said.

“That is why my answer is it is constitutional but barely,” Jardeleza said.

Jardeleza added that collection of traffic data is allowed as long as there is “due cause.”

Carpio, together with Sereno, Associate Justices Teresita Leonardo De Castro, Mariano Del Castillo, Jose Perez asked what is due cause.

Jardeleza said “unfortunately, that is one of our misgivings under the law.”

“The law does not define what due cause means. Who will initiate the determination of due cause,” De Castro asked.

“You are right your honor,” Jardeleza said.

Sereno noted that Jardeleza himself demonstrated unease with Section 12.

“Section 12 grapples with due cause. What kind of animal is this and who will identify this animal…This section is the heart of the law, without this, this law is good for nothing,” Sereno said.

Without the Cybercrime Law, Carpio said, hacking can still be prosecuted under Republic Act 8792 or the E-Commerce Law.

“Even if we void this law, it is not a problem, hacker can still be penalized,” Carpio said.

The high court gave both the government and the anti-cybercrime law advocates 20 days to submit their memoranda.