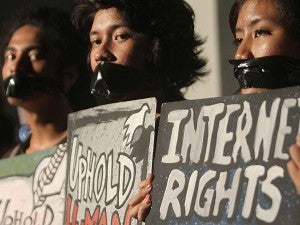 Alliance of youth organizations and institutions against cybercrime law held a vigil in front of the Supreme Court building in Padre Faura in Manila on Jan. 14, 2013, the eve of the high tribunal’s hearing on the oral arguments against the controversial law. INQUIRER FILE PHOTO

MANILA, Philippines—Journalists have no reason to fear Republic Act 10175 or the Cybercrime Prevention Act, government lawyers said Tuesday but justices of the Supreme Court are doubtful.

Under the Single Publication Rule, a complainant for libel has only one claim for every mass publication.

Jardeleza made the pronouncement after he was questioned by Justices of the Supreme Court on Section 7 of the Cybercrime Prevention Act of 2012, which allows prosecution under the law and simultaneously prosecuted for violation of the Revised Penal Code.

Section 7 of the law provides that “a prosecution under this Act shall be without prejudice to any liability for violation of any provision of the Revised Penal Code, as amended, or special laws.”

Jardeleza said Section 7 does not include libel.

“Libel is specially mentioned as content offense but Congress did not provide separate penalty for that so-called content libel,” Jardeleza said adding that Section 7 refers to other cybercrime offenses.

Senior Associate Justice Antonio Carpio, on the other hand, said Section 7 violates the prohibition against double jeopardy, which means that no person shall be tried for the same offense twice.