Kim Jong-Un and the mystery smartphone 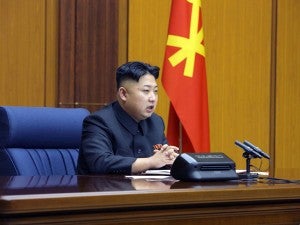 SEOUL – A picture of North Korea’s Kim Jong-Un with a smartphone has triggered fevered speculation about which brand is favored by the leader of one of the world’s most repressive nations.

The photo released by the North’s state media showed Kim presiding over a meeting with top national security advisers last week — a meeting believed to have been focused on Pyongyang’s threat to conduct an imminent nuclear test.

It also showed a black smartphone on the table next to Kim’s arm — as well as a lit cigarette in his hand.

“It’s believed that the smartphone belonged to Kim given that the device was placed right next to the documents he was looking at,” a Seoul government official told AFP.

The South Korean media gave the picture prominent coverage, opening a debate over the manufacturer, with speculation ranging between South Korea’s own Samsung, Taiwan’s HTC and iPhone maker Apple.

Samsung, the world’s top smartphone maker, was adamant that one of its flagship Galaxy models had not turned up across the border.

“It’s not a Samsung phone,” a company spokesman told AFP, adding that it looked more like an HTC model.

The Seoul government official said the picture had been analyzed by the South’s intelligence agency which also concluded that the Taiwanese firm was the likely manufacturer.

HTC declined to identify the device but said in a statement that the company appreciated the “support of all users”.

While North Koreans live in probably the most isolated and censored society on the planet, the country is not a complete IT desert.

Mobile phones were introduced in 2008 through a joint venture with the Egyptian telecom firm Orascom, and a domestic Intranet was launched in 2002.

But the one million normal cellphone subscribers can only phone each other, not outside the country, and the Intranet is similarly cut off from the rest of the worldwide web.

“Kim and his family members as well as the North’s political elite appear to use smartphones or other mobile phones capable of accessing the Internet,” said the Seoul official.

Kim, believed to be in his late 20s, took over the country after the death of his father Kim Jong-Il in December 2011, completing a second dynastic succession of the Kim family.