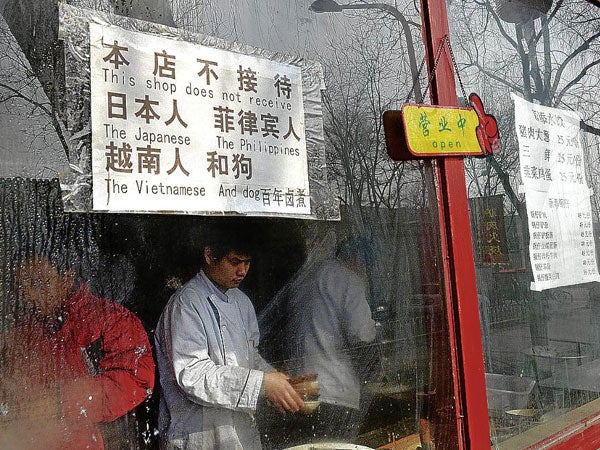 A restaurant in Beijing displays its sentiment toward the citizens of the Philippines, Vietnam and Japan with which China has territorial issues in the West Philippine Sea and the Sea of Japan. The sign says Japanese, Filipinos, Vietnamese and dogs are barred from the restaurant, presumably in that order. AFP

HANOI—A sign at a Beijing restaurant barring citizens of nations involved in maritime disputes with China — along with dogs — has triggered a wave of online outrage among Vietnamese and Filipinos.

The Beijing Snacks restaurant near the Forbidden City, a popular tourist spot, has posted a sign on its door reading “This shop does not receive the Japanese, the Philippines, the Vietnamese and dog(s).”

Photographs of the controversial sign have gone viral in Vietnamese-language forums and featured heavily in Philippine newspapers and websites on Wednesday.

Vietnam’s state-run Tuoi Tre newspaper ran a story saying the sign had “ignited online fury”. It claimed many Vietnamese feel this is another example of Chinese “extreme nationalism that deserves to be condemned”.

“It’s not patriotism, it’s stupid extremism,” Sy Van wrote in Vietnamese in a comment under the story, published on the paper’s website.

“This is teaching hate to the younger generation,” Facebook user Andrea Wanderer wrote in Vietnamese. “The owner of the restaurant has obviously been brainwashed by their government,” added Facebook user Chung Pham.

Filipinos greeted the photo with a mixture of fury and amusement.

“Blatant racism at Beijing Restaurant,” journalist Veronica Pedrosa wrote in one widely-shared tweet, while Facebook user Rey Garcia used a comment thread on a news site to retort: “Who cares, they almost cook everything, even fetus and fingernails.”

The sign’s wording is particularly inflammatory as it recalls China’s colonial era, when British-owned establishments barred Chinese from entering.

A sign supposedly reading “No Dogs and Chinese allowed” became part of Communist propaganda after it was said to have hung outside a park in Shanghai when Western powers controlled parts of China.

It has become part of Chinese folklore and featured in the 1972 Bruce Lee film “Fists of Fury” — but many historical experts say no such sign ever existed.

The controversial Beijing sign was still in place Wednesday, according to the restaurant owner who gave only his surname of Wang. “No officials have contacted me about it. This is my own conduct,” Wang told AFP.