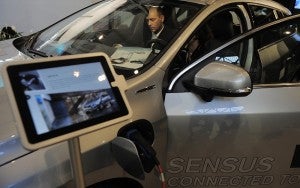 In this Feb. 26, 2013, photo man is pictured inside of a Car Volvo V60 P-IH at the Mobile World Congress, the world’s largest mobile phone trade show, in Barcelona, Spain. The first wave of the wireless revolution was getting people to talk to each other through cellphones. The second, it seems, will be getting things to talk to each other, with no human intervention: cars that talk to your insurance companys computers, bathroom scales that talk to your phone, and electric meters that talk to your air conditioners. So-called machine-to-machine technology all the buzz at this years largest wireless trade show, and some analysts believe these types of connection will outgrow the traditional phone business in less than a decade. (AP Photo/Manu Fernandez)

BARCELONA, Spain — A car that tells your insurance company how you’re driving. A bathroom scale that lets you chart your weight on the Web. And a meter that warns your air conditioner when electricity gets more expensive.

Welcome to the next phase of the wireless revolution.

The first wave of wireless was all about getting people to talk to each other on cellphones. The second will be getting things to talk to each other, with no humans in between. So-called machine-to-machine communication is getting a lot of buzz at this year’s wireless trade show. Some experts believe these connections will outgrow the traditional phone business in less than a decade.

“I see a whole set of industries, from energy to cars to health to logistics and transportation, being totally redesigned,” said Vittorio Colao, the CEO of Vodafone Group PLC, in a keynote speech at the Mobile World Congress in Barcelona, Spain. The British cellphone company has vast international interests, including its 45 percent ownership stake in Verizon Wireless.

Companies are promising that machine-to-machine, or M2M, technology will deliver all manner of services, from the prosaic to the world-changing. At U.S. chipmaker Qualcomm Inc.’s booth here at the show, there’s a coffeepot that can be ordered to start brewing from a tablet computer, or an Internet-connected alarm clock. A former president of Costa Rica is also at the show, talking about how M2M can save massive amounts of greenhouse gases by making energy use more efficient — enough to bring mankind halfway to the goal of halting global warming.

The M2M phenomenon is part of the larger drive to create an “Internet of Things” —a global network that not only links computers, tablets and phones but that connects everything from bikes to washing machines to thermostats. Machina Research, a British firm, believes there will be 12.5 billion “smart” connected devices, excluding phones, PCs and tablets, in the world in 2020, up from 1.3 billion today.

But how does this transformation happen, and who stands to profit?

First, the devices have to be able to connect. That’s not a trivial undertaking, especially considering that people don’t upgrade washing machines or renovate their homes as often as they change cellphones and PCs. One company at the show, a Los Angeles-based startup named Tethercell, has an ingenious solution for battery-powered devices: a “fake” AA battery that houses a smaller AAA battery in an electronic jacket. It can be placed in a battery compartment with other batteries. Within a distance of 80 feet, some smartphones and tablets can then signal the “battery” to turn the device on or off. For instance, parents whose kids have a lot of noisy toys can turn all of them off with touch of a single button. A fire alarm could send a text-message warning that its battery is running low, rather than blaring an audio signal.

Unfortunately, a Tethercell from the first production run costs $35. Co-founder Kellan O’Connor believes the price can come down to $10, but that’s still a non-trivial cost, and symptomatic of the high price of building out the Internet of Everything. For devices that need to connect at long range over a cellular network, the cost of radio components alone ranges from $10 to $70, according to analyst Dan Shey of ABI Research.

That’s not expensive in the context of some big-ticket items, like cars, which have been forerunners when it comes to non-phone wireless connections. General Motors Corp. started equipping cars with OnStar wireless calling and assistance services in the mid-90s. At the show, it announced it is updating the service for faster data connections, enabling services like remote engine diagnostics and upgrades to the control software.

AT&T Inc., which has been aggressive about getting into the M2M business, is ousting Verizon Wireless as the network provider for OnStar.

Colao, the CEO of Vodafone, gave an example of another “smart” car application that might seem intrusive to some: the company has been trying out a service in Italy that lets an auto insurance company know how much a car is being used, and charges premiums accordingly. It can also score the driver based on his or her driving style, and give pointers on how to handle the car more safely.

Cellular connections are creeping into smaller, cheaper devices. Ecooltra, which rents out electric scooters by the day in Spain, wants to connect them to the Internet, which would let renters figure out through their phones where there’s a scooter for rent and how much of a charge is in its battery. The feature is perfect for quick, impromptu rentals by the hour. Adding “smarts” to the scooters in the shape of a cellular modem would turn the company from a conventional rental service to a “scooter-sharing” business, much like car-sharing services like Zipcar.

Once devices are connected, the next problem is getting them to talk to each other, and making sense of what they’re saying. ABI’s Shey says this is the real business opportunity in M2M, more valuable than making the modems or providing the wireless connections. He believes that’s driving a behind-the-scenes scramble of deal-making at the show, as companies like AT&T seek to bolster their ability to support M2M by acquiring companies that provide a “middle layer” of software between the devices and their owners.

For connections between devices in the home, like that remote-controlled coffee-pot, Qualcomm touts its AllJoyn project, which it seeks to make an industry standard. Currently, the main ways for devices to connect to each other and figure out what they can do, like Bluetooth and DLNA, are too limited and difficult to use, said Rob Chandhok, president of Qualcomm Innovation Center.

With AllJoyn, “there’s nothing to stop you from making a speaker that listens for notifications and turns them into speech, so you hear, ‘Hey, you left the refrigerator door open!'” Chandhok said. “You take very simple things and connect them, and people build experiences on top of them. That’s what we’re trying to do.”

Jose Maria Figueres, the former president of Costa Rica, is now the president of the Carbon War Room, an organization co-founded by billionaire Richard Branson to promote cutbacks in greenhouse-gas emissions through smart private enterprise. Figueres believes M2M has huge potential to wring efficiency out of energy-guzzling activities, and could reduce emissions equivalent to 9.1 billion tons of carbon dioxide by 2020 — roughly equal to the combined emissions of India and the U.S. today.

Vodafone provided one example of how this might be done. The city of Groningen in the Netherlands has put sensors in the trash containers that serve public-housing units. They alert trash haulers when they need to be emptied, saving on unnecessary trips and reducing fuel use by 18 percent.

With M2M, “in many cases you have information moving instead of us moving,” Figueres said.

In another example, Dutch authorities started controlling their street lights wirelessly rather than with “dumb” timers. They save on energy by dimming the lights if traffic is scant, but can also turn them on early if the day is dark.

Could M2M be overhyped — a promise that won’t deliver? The wireless industry is no stranger to rosy projections that don’t pan out. Shey, the ABI analyst, thinks M2M will deliver, but perhaps not in a sexy, flashy way. When machine-to-machine connections are created, he said, it’s usually not because someone is making a big bet on the future, but because they save money.

“It’s about gaining more out of the asset that you have, like a truck. When it needs maintenance it gets maintenance at the right point. Or ensuring that the vending-machine guy only goes to the vending machine when it’s empty,” he said.