Half of $1B Apple awarded from Samsung invalidated 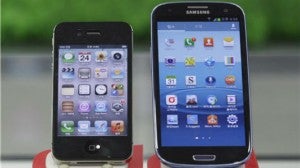 Samsung Electronics’ Galaxy S III, right, and Apple’s iPhone 4S are displayed at a mobile phone shop in Seoul, South Korea, Friday, Aug. 24, 2012. South Korea’s Samsung won a home court ruling in its global smartphone battle against Apple on Friday when Seoul judges said the company didn’t copy the look and feel of the U.S. company’s iPhone, and that Apple infringed on Samsung’s wireless technology. However, in a split decision on patents, the panel also said Samsung violated Apple technology behind the bounce-back feature when scrolling on touch screens, and ordered both sides to pay limited damages. AP/Ahn Young-joon

SAN JOSE, California— A U.S. judge is erasing nearly half of the $1 billion in damages that a jury decided Samsung Electronics should pay Apple in a high-profile trial over the smartphone and tablet computer patents.

Koh also ordered a new trial on Apple’s allegations that Samsung stole its ideas for more than a dozen different smartphones and tablet computers.

The judge says the jury had made several mistakes in its deliberations.