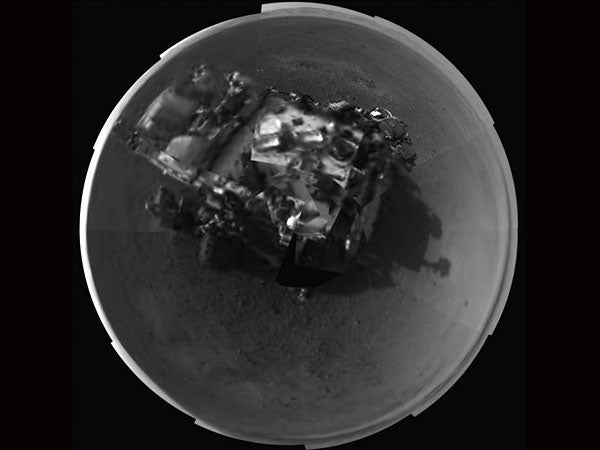 In this image released by NASA on Wednesday, Aug. 8, 2012, a self portrait of NASA’s Curiosity rover was taken by its Navigation cameras, located on the now-upright mast. The camera snapped pictures 360-degrees around the rover. AP/NASA

WASHINGTON—NASA’s Mars rover Curiosity has been temporarily put into “safe mode,” as scientists monitoring from Earth try to fix a computer glitch, the US space agency said.

Scientists switched to a backup computer Thursday so that they could troubleshoot the problem, said to be linked to a glitch in the original computer’s flash memory.

“We switched computers to get to a standard state from which to begin restoring routine operations,” said Richard Cook of NASA’s Jet Propulsion Laboratory, the project manager for the Mars Science Laboratory Project, which built and operates Curiosity.

A NASA statement said scientists expect to shift the powered-down computer on Curiosity back to full operation in the coming days.

The $2.5 billion Curiosity mission, which is set to last at least two years, aims to study the Martian environment and to hunt for evidence of water in preparation for a possible future manned mission.