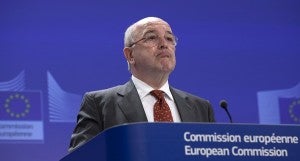 European Commissioner for Competition Joaquin Almunia speaks during a media conference at EU headquarters in Brussels on Wednesday, March 6, 2013. The European Union Commission has fined Microsoft euro 561 million (US dollars 733 million) for breaking the terms of an earlier agreement to offer users a choice of internet browser. AP/Virginia Mayo

AMSTERDAM — The European Union has fined Microsoft €561 million ($733 million) for breaking a pledge to offer personal computer users a choice of Internet browsers when they install the company’s flagship Windows operating system.

The penalty imposed by the EU’s executive arm, the Commission, is a first for Brussels: no company has ever failed to keep its end of a bargain with EU authorities before.

In 2009, Microsoft Corp. struck a broad settlement with the Commission to resolve disputes over the company’s abuse of the dominance of Windows, which had spanned more than a decade.

Back then, the company agreed to pay €860 million and promised to give Windows users the option of choosing another browser rather than having Microsoft’s Internet Explorer automatically installed on their machines.

But Microsoft failed to stick to the deal for some 15 million installations of Windows 7 software in Europe from May 2011 until July 2012. The company admitted the failure last year, adding that it was a mistake.

The Commission’s top competition regulator, Joaquin Almunia, said at a press conference in Brussels, Belgium, Wednesday that the fine reflected the size of the violation and the length of time it went on for. It was also intended to make an example of Microsoft and deter other companies from doing same thing. In theory, the commission could have fined Microsoft up to 10 percent of its global annual sales during the period the violation took place.

“A failure to comply is a very serious infringement that must be sanctioned accordingly,” Almunia said.

Keith Hylton, a professor of law and antitrust specialist at Boston University said the fine was “far in excess of any benefit Microsoft could have gotten from the error, and vastly in excess of any harm to EU consumers, who are all aware of alternatives to Internet Explorer.”

In all, Microsoft has now paid €2.2 billion in fines to the Commission since 1998, when regulators opened their first investigations into the company after Sun Microsystems complained it had been denied access to technical documents. Over the years, the EU has broadened its investigation to include whether Microsoft had abused Window’s near-monopoly over the market for computer operating systems to corner other markets, including server software, streaming media software, and Internet browsers.

Anthony Sabino, an antitrust lawyer and professor at St. John’s University, said the Commission was right to fine Microsoft for the latest lapse, but the size of the penalty seemed “disproportionate…perhaps even petty, given that Microsoft has paid its fines and yielded to all the demands of the EU.”

“They have been slow to acknowledge that, while powerful, Microsoft is not invincible,” he said.

Sabino added that Microsoft may be paying the price in part for its aggressiveness in the past in testing the limits of what regulators will tolerate.

Given the length of time the latest violation went on, and the number of users affected, “it does strain credibility” that Microsoft wouldn’t have known it had failed to keep its part of the agreement, Sabino added.

For its part, Microsoft was apologetic.

“We take full responsibility for the technical error that caused this problem and have apologized for it,” the company said in a statement. “We provided the Commission with a complete and candid assessment of the situation, and we have taken steps … to help avoid this mistake — or anything similar — in the future.”

Microsoft’s Internet Explorer still has a 56 percent market share for Internet browsers on personal computers, according to statistics by Net Applications. Mozilla’s Firefox has 20 percent while Google’s Chrome has a 17 percent share. Microsoft is required to continue to offer consumers a choice of browsers through 2014.

“For technology companies, often the best policeman is technological progress itself,” Sabino said.

Rather than imposing unilateral fines, Almunia has advocated negotiated settlements since he took over as commissioner in 2010. He believes that competition issues are best resolved quickly and that slapping big fines on companies years after the fact does little to help consumers.

But he said the whole point of a settlement is undermined when companies then don’t abide by its terms.

“They must do what they committed to do, or face the consequences,” he said.

Almunia conceded that the Commission had been “naive” in appointing Microsoft itself to oversee compliance with the agreement, and said the Commission won’t allow that in the future.