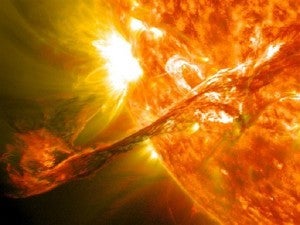 This image provided by NASA shows an image captured by NASA’s Solar Dynamics Observatory of a blast of plasma streaming from the sun in August 2012. Scientists say a solar eruption was detected on March 5, 2013 and was headed toward Mars. NASA’s Curiosity rover will postpone some activities but other Mars missions will operate normally. AP/NASA

LOS ANGELES — Curiosity hunkered down Wednesday after the sun unleashed a blast that raced toward Mars.

While the hardy rover was designed to withstand punishing space weather, its handlers decided to power it down as a precaution since it suffered a recent computer problem.

On Tuesday, scientists noticed a huge flare erupting from the sun that hurled a stream of radiation in Mars’ direction. The solar burst also spawned a cloud of superheated gas that barreled toward the red planet at 2 million mph (3.2 million kph).

The eruption did not appear severe or extreme, but “middle of the road, all things considered” said space weather chief Bob Rutledge at the National Oceanic and Atmospheric Administration.

The solar tempest was not expected to have an impact on Earth. In the past, such outbursts have triggered solar storms with the ability to disrupt utility grids, airline flights, satellite networks and GPS services. They’re also known to produce shimmering auroras in places farther from the poles.

Since Mars lacks a planet-wide magnetic field, it does not experience geomagnetic storms. Rather, the planet sees a spike in radiation, Rutledge said.

Powerful solar blasts can cause trouble to Mars spacecraft. In 2003, an intense solar flare knocked out the radiation detector on the Odyssey orbiter.

NASA does not expect similar drama from the latest solar activity.

In the worst-case scenario, one or more of the working Mars spacecraft may enter “safe mode” in which science activities are halted but they remain in contact with Earth.

The unsettled space weather comes as Curiosity is recovering from a memory hiccup that put its science experiments on hold. It was the first major problem to hit the car-size rover since it landed last year in an ancient crater near the Martian equator to hunt for the chemical building blocks of life.

Engineers were in the middle of troubleshooting when they decided to wait for the weather to pass. The delay means it’ll take longer for Curiosity to return to analyzing the pinch of rock powder it collected from a recent drilling.

Since its instruments are turned off, it can’t use its radiation sensor to track the solar particles.