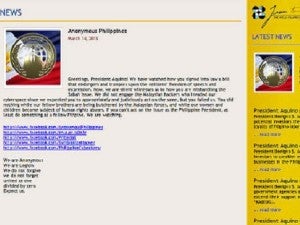 MANILA, Philippines – The website of the Office of the President was hacked by Anonymous Philippines Thursday morning because President Benigno Aquino III was allegedly “mishandling the Sabah issue.”

“Greetings, President Aquino! We have watched how you signed into law a bill that endangers and tramples upon the netizens’ freedom of speech and expression. Now, we are silent witnesses as to how you are mishandling the Sabah issue,” the hacker group said in its message that took over the website.

“We did not engage the Malaysian hackers who invaded our cyberspace since we expected you to appropriately and judiciously act on the same, but you failed us. You did nothing while our fellow brothers are being butchered by the Malaysian forces, and while our women and children become subject of human rights abuses. If you can’t act on the issue as the Philippine President, at least do something as a fellow Filipino. We are watching,” it said.

Malacañang confirmed that President Benigno Aquino III’s website, www.president.gov.ph, was breached in the wee hours of the morning.

“At around 1:30 a.m. today, we detected a breach when an errant sentence critical of the government on the Sabah issue was found to have been inserted in one of the news items within the website,” Secretary Herminio Coloma said in a statement Thursday.

No further intrusions were made as “the internal security protocols were activated,” said Coloma of the Presidential Communications Operations Office.

When accessed before 10 a.m., the website showed the message:  “We are performing scheduled maintenance, and will be back soon.”

“We expect to resume public display of the President’s website in a few hours after needed protection measures have been put in place,” Coloma said.

Alleged human rights abuses were committed by Malaysian security forces as they were conducting their sweeps of villages in Lahad Datu, Sabah searching for the supporters of the Sultanate of Sulu that sailed there to revive their territorial claim.

Malaysia has denied any acts of human rights abuses by its security forces.