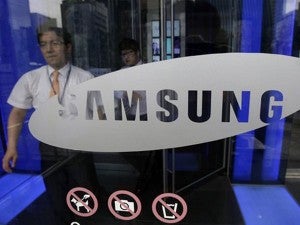 An employee of Samsung Electronics Co. walks out the company's headquarters in Seoul, South Korea. Samsung is suing a German rival over energy-saving LED lighting technology, among others. AP Photo

SEOUL, South Korea — A Samsung unit is raising the ante in a patent dispute with a German rival over energy-saving LED lighting amid intensifying legal disputes among global companies jockeying for supremacy in key consumer technologies.

Samsung LED Co. said Sunday that it asked the United States International Trade Commission on Friday to bar products of Osram GmbH and two units from entering the U.S.

Last month, Samsung LED sued Osram Korea Co. and two local companies that sell its products in South Korea in retaliation for what is said were suits by Osram at the USITC, in the Delaware court and in Germany.

“Samsung LED intends to vigorously enforce its intellectual property rights, and these lawsuits reflect Samsung LED’s commitment to that enforcement,” the company said in a release.

Semiconductor-based LEDs, or light emitting diodes, are becoming increasingly popular for their durability and energy-saving capability.

Samsung LED also suggested it could expand the scope of the USITC case.

“As new information becomes available it will continue to evaluate the potential to add additional parties who may be importing, using or selling the accused Osram LEDs in the U.S. market,” the company said in the release.

Such complaints and lawsuits over patents are common in the global technology industry and seldom lead to market disruptions as disputes take months or years to resolve and typically end with payments of licensing fees rather than import bans.

Still, they highlight the intensity of competition in which technological advantage can give companies a key edge in attracting consumers.

Rochester, New York-based Eastman Kodak Co. has an ongoing patent dispute over photo technology at the USITC with Apple Inc. of Cupertino, California, and BlackBerry maker Research in Motion Ltd. of Waterloo, Canada.

Samsung Electronics is embroiled in multiple complaints and lawsuits with Apple over smartphone and tablet technology. Separately, Samsung and Taiwan’s AU Optronics Corp. have launched legal actions against each other over alleged patent infringement in liquid crystal displays.