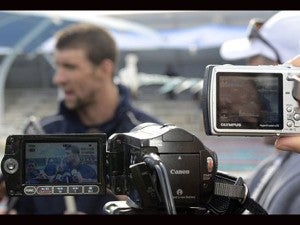 U.S. swimmer Michael Phelps may have to resort to more conventional modes of conversation to family and friends overseas when he arrives this week at the world championships in China, where Twitter and Facebook are blocked by the government (AP Photo/Steve Holland).

SHANGHAI — Michael Phelps recently tweeted his mother from the American team’s training camp in Australia. The 14-time Olympic champion may have to resort to more conventional modes of conversation when he arrives this week at the world championships in China, where Twitter and Facebook are blocked by the government.

Unless users know how to create their own virtual private network (VPN) or are willing to spend heavily on roaming fees and post from foreign-based smartphones, access to foreign social networking sites in China is difficult.

The government began blocking foreign social networking sites in the first half of 2009 and shut down some Chinese clones after deadly ethnic riots in China’s heavily Muslim Central Asian border region of Xinjiang.

“We haven’t even tried. We’ve been to China so many times that we just know you can’t do it,” said Australian diver Sharleen Stratton after pairing with Anabelle Smith to win the bronze medal in 3-meter springboard synchro on the opening night of competition Saturday.

“So we kind of prepare ourselves before we go and tell everybody they won’t hear from us for three weeks.”

“I use social media a lot when I’m at home. So with everything blocked here I can’t get a hold of anybody,” he said. “I’ve been silent since I got here. The only people I’ve talked to are my parents.

“I’ve got a lot of free time now. I’m reading books now,” added Fleshner, who began a fantasy-adventure novel, “The Lightning Thief,” on his way to the pool Saturday.

Facebook was available in China when Phelps won a record eight golds at the 2008 Beijing Olympics, and Phelps recently started posting on Twitter — his following has quickly shot up to 56,000 followers.

On Friday, Phelps posted this message to his mother, Debbie, from his training base on Australia’s Gold Coast: “MamaPhelpsH20 thanks mom!!! Miss u and love u!!! See u when u get over here!”

China had committed to a more open Internet during the 2008 Olympics, at least in Beijing. But that was before the Iranian protest movement of 2009 or this year’s “Arab Spring” when social networks proved their capabilities for organizing protest rallies against governments.

Some Chinese circumvent controls by using VPN services, though that has become more difficult in recent months. At the same time, the popularity of a homegrown Twitter-like service, Sina Weibo, has increased.

The government counts on Sina to police the postings and expunge objectionable material that mechanical filtering does not block. Chinese, however, often find inventive, subtle ways to post views critical of the government.

“It’s cool to communicate with the Chinese population and it’s funny to read their posts,” said Boudia, who is also keeping his Twitter account updated with his American phone. “I’m really into social media networking.”

Of course, not everybody is affected. After all, some people still don’t use social networking.

For the record, swimming governing body FINA has not intervened to open Facebook and Twitter to athletes competing here.

Said FINA executive director Cornel Marculescu: “If it’s blocked do you think we have the power to change it?”