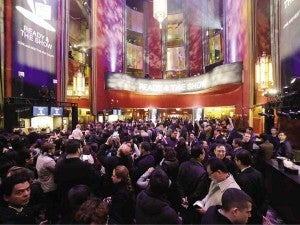 NEW YORK CITY—Most everything you heard—and got you excited—about the Samsung Galaxy S4 turned out to be true.

Tech geeks were right on the money with the predicted upgrades on Samsung’s newest flagship smartphone, unveiled in its “Unpacked” event March 14 in the Big Apple, less than a year after its predecessor, the Galaxy S3, debuted in London.

Even as features like wireless battery charging turned out to be just rumors, the South Korean giant revealed some nifty features for its latest headliner, including a bigger screen, a souped-up camera, and touch-less gestures, all eliciting cheers in the full-packed Radio City Music Hall. 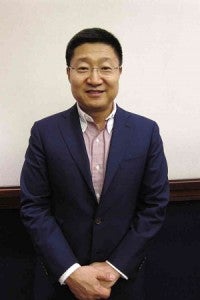 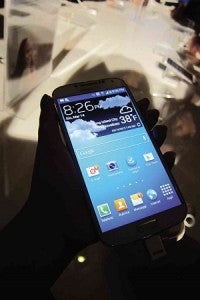 “[OWNERS of previous models] are always the first to switch, I think—people who have to have the latest,” says Samsung Asia president and CEO Gregory Lee of the launch of Samsung Galaxy S4, only months after the S3’s
release. PHOTO BY CHECHE V. MORAL

The S4 runs on the Android 4.2.2 (Jelly Bean), with three memory storage options—16, 32 or 64 GB, expandable up to 64 GB with a micro SD slot, and a 2 GB RAM. It will ship in two processor options—1.9GHz Qualcomm quad core and 1.6GHz Exynos Octa octa core—but it is yet unclear which markets will get which.

One of the highlights of the Galaxy S4, which will roll out globally by end of April or early May, is the camera, which has been upgraded to 13 megapixels in the rear and 2 megapixels on the front.

It was the camera’s software-based features that were given much emphasis in Samsung president and head of IT and mobile communications division JK Shin’s keynote, and predictably what could pique the interest of non-tech geek consumers, to upgrade their “selfie” experience. 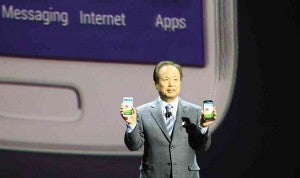 “PEOPLE-INSPIRED innovation” is how JK Shin, Samsung president and head of IT and mobile communications division, describes the Galaxy S4.

The S4 has a Dual Camera function that allows the user to use both front and rear cameras simultaneously; meaning, the user’s own image can be melded side by side with the image of his/her subject.

The Dual Video Call works similarly: make and receive a video call while showing what you’re looking at during the call. The Sound and Shot feature, meanwhile, allows the user to capture a few seconds of sound and voice to be stored with the still shot.

The Drama Shot allows users to capture a sequence of shots in quick bursts to create animated GIFs. And you can also say bye-bye to “photo bombers” with the Eraser feature. 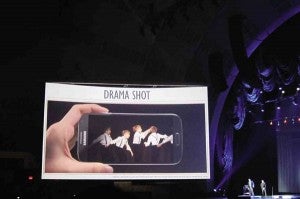 THE GALAXY S4 has a souped-up camera with fancy software-based features.

Then there are the touchless gestures. That S4 is incapable of turning pages at the literal blink of an eye, as was rumored (though you can do so with a slight tilt of the phone with the Smart Scroll function), but it allows the user to answer calls, for instance, without touching the unit.

Say, you’re eating greasy food with your fingers and your phone rings. With the Air Gesture, you can answer your call with a wave of your hand. Same thing with scrolling up and down Web pages.

Similarly, Air View allows the user to preview messages and e-mails by simply hovering a finger over the icons on the screen. The S Voice Drive, meanwhile, automatically converts text to speech so there’s no need to look at the phone screen when driving. 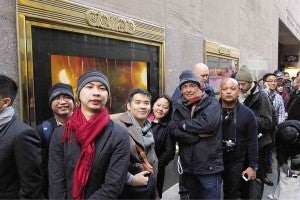 The Smart Pause feature elicited guffaws and applause in the Broadway skit presentation: The phone recognizes when your eye shifts while watching a video that it pauses, and turns right back on when your eye returns to the screen.

There’s also the Group Play function, which allows up to eight S4 users to share games, music and other content without the need of a Wi-Fi or cell signal. For frequent travelers, the S Translator provides both voice and text translation of over 10 languages.

Samsung has also incorporated the S Health software in this new phone (some external accessories will be sold separately), which can monitor one’s blood sugar, sleep cycle, as well as exercise and food diaries. 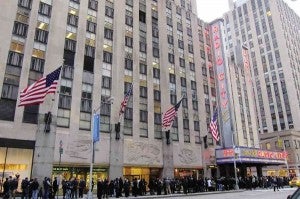 JOURNALISTS and vendors queue up for the launch of the Galaxy S4 at the Radio City Music Hall in New York City. PHOTO BY CHECHE V. MORAL

The Galaxy S4 will also ship with the Samsung Knox, the fortified security suite that industry watchers believe is targeted at the BlackBerry consumer.

The S4 features will be available in the S3 at a much later time.

But for all its hyped upgrades, will consumers buy, considering the Galaxy S3 was released less than a year ago, and most S3 owners are locked in two-year contracts with their service providers?

Gregory Lee, president and chief executive of Samsung Asia, believes they will.

“[Owners of previous models] are always the first to switch, I think—people who have to have the latest,” Lee told Filipino journalists a few hours before the launch of the Galaxy S4.

“We have to look into marketing programs to see if we can [give incentives] to people to make it easy for them to switch. We don’t have that detail yet. But we’ve already been in the market for nine months for the S3, and we’re also in the market with other products,” he added, noting even those who own entry-level units like the Galaxy Y may want to upgrade to an S4.

“We’re not sourcing from one area of consumers, but from different areas.”

Lee added, “We’re in a very early stage of smartphone development. In the future, smartphones will get better and better where it’s going to do so many things than what it’s doing today, so the market has a long way to go before it’s completely saturated. The point is that consumers today, although they just bought something one to two years ago, technology is moving so fast there’s always that desire to want to own the next better thing.”

At a luncheon with regional media attending the launch, Lee boasted of Samsung’s global earnings in 2012—$187 billion, a 31 percent growth—driven, he said, by the mobile Internet business.

“This is a $400-billion business category worldwide, and the fastest growing business to be in, and we should take advantage of it.”

He added that Samsung’s market in Southeast Asia, Australia and New Zealand posted a 63-percent growth in the last year, larger than any region in the world. It shows that “Asians are adapting to smartphones faster than any other consumers in the world,” Lee said.

He also underscored Samsung’s readiness to meet the global demand for its new flagship phone.

“When we launched the Galaxy S1, it was very difficult to convince people that this is going to be a great product. Even the press was skeptical,” he said. “In the end, we can only deliver one-third of the demand. We didn’t expect it to be as successful as it was. With the Galaxy S4, we’re ready. We’re extremely confident with the S4.”

Galaxy S3 has sold 43 million units, and Lee said it’s also building the Note category, with the Note 2 selling some 10 million units since it launched.

Samsung, which has a wide mobile phone portfolio, outsold its biggest rival, iPhone, last year, though it still has to catch up to iPhone’s all-time sales. That it had brought the Galaxy S4 launch to the iPhone’s home turf has sent industry watchers agog.

When asked to comment on an interview given by a top Apple executive two days before the S4 launch that essentially belittled Android phones, Lee said, “I cannot comment about our competitors. None of our answers are related to any of our competitors. Samsung has been launching globally for quite a while since the S1—in Spain, in London… We’re a global player.”

Interestingly, other Android-based phone makers also launched their own guerrilla marketing at Samsung’s expense during the S4 launch.

Taiwan’s HTC fielded marketers to offer hot cocoa and discount flyers to journalists and vendors lined up in subzero weather outside the Radio City Music Hall, the S4’s launch venue. In Times Square, Korean rival LG occupied a billboard right above the Galaxy S4’s, with a copy that spoofed the Samsung ad.

But the biggest mobile phone maker in the world in unfazed.

“The most important thing is we want to is to put the best phone out into the marketplace, the top-of-the-line flagship product,” Lee said. “So if you compare it, you’ll say that this is the best smartphone in the world. We want to take that position. That’s what this phone is about.”