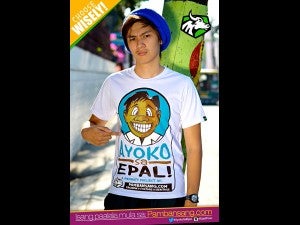 CITY OF MALOLOS—A design and merchandising shop, popular for its Bulacan-oriented fashion line, has joined the campaign for clean elections by marketing anti-“epal” T-shirts.

Pambansang.com announced its new line, called the “May 2013 election Anti-Epal” shirts, on its website and through social networking sites.

“Epal” is a reference to campaigning politicians who take credit for every government project through banners or signboards featuring their faces and names.

The statement, “Ayoko sa Epal (I don’t like Epal),” is featured on the shirts. It is inscribed inside a thought or dialogue balloon next to a cartoon of a politician.

The shirt also bears the logo, “A priority project of Pambansang.com,” to ridicule epal candidates, as well as a serious reminder to “choose wisely” on election day.

June Joson, Pambansang.com’s owner, said on Wednesday the shirts were produced as a limited edition of 500 pieces that would be out in the market next week.

A former history professor of De La Salle University in Manila, Joson said: “This is for voters who believe their choices benefit the young. Candidates should be aware that politics has changed.”