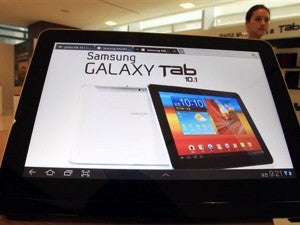 Shin Jong-kyun, president of the company’s mobile communications business, made the announcement Wednesday at the South Korean launch of the Galaxy Tab 10.1 tablet computer.

Shin did not say, however, exactly when during August the smartphone would be available for American consumers, nor did he provide further details.

Apple Inc. has yet to release a new iPhone model for this year, though analysts are expecting one in September, so the South Korean company may be hoping to get a leg up on its American rival amid intensifying competition for smart devices.

Cupertino, California-based Apple, which on Tuesday announced stellar earnings results for the fiscal third quarter that ended in June, is enjoying strong sales of its iPhone in Asia, including Samsung’s home turf of South Korea.

Apple sold 20.3 million iPhones during the quarter, millions more than analysts had expected. The popularity of smart devices has exploded worldwide since the 2007 launch of the iPhone.

Besides competing in the marketplace, Samsung and Apple are currently embroiled in multiple complaints and lawsuits over smartphone and tablet technology, with each claiming patent violations by the other.

Samsung already sells the earlier version of the Galaxy smartphone in the U.S. The newer one, which the company calls its “flagship smartphone,” went on sale in South Korea in late April, in Britain and Russia in May and in Japan last month, with plans for a continued global rollout.

The company said earlier this month that it had sold 3 million Galaxy S IIs so far.

Shin said that Samsung expects to sell five times as many tablets in 2011 versus last year, when the company said it sold more than 1.5 million. If achieved, that means the company would sell more than of 7.5 million tablets this year.

Samsung has already released the Galaxy Tab 10.1 in the United States starting last month. At 10.1 inches, the screen is bigger than the 7-inch initial version. The device is just 0.34 inches (8.6 millimeters) thick, which Samsung says makes it the world’s thinnest tablet device. Besides the U.S. and South Korea, it is also available in Indonesia, Italy and Sweden so far.

Shin has said previously that Samsung’s sales target for mobile phones this year is 300 million handsets. Out of that total, the company expects 60 million to be smartphones.

Samsung plans to release earnings results for the three months through June on July 29, at which time it will likely announce more details on sales during the first half of 2011 and the outlook for the rest of the year.