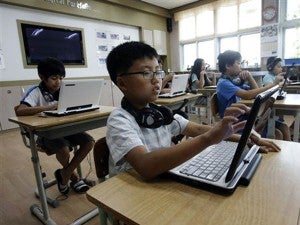 GOESAN, South Korea — Outside the classroom a hot summer day beckons, but fourth-grade teacher Yeon Eun-jung’s students are glued to their tablet PCs as they watch an animated boy and a girl squabble about whether water becomes heavier when frozen.

The small scene in this rural town is part of something big: South Korea is taking a $2 billion gamble that its students are ready to ditch paper textbooks in favor of tablet PCs as part of a vast digital scholastic network.

France, Singapore, Japan and others are racing to create classrooms where touch-screens provide instant access to millions of pieces of information. But South Korea — Asia’s fourth-largest economy — believes it enjoys an advantage over these countries, with kids who are considered the world’s savviest navigators of the digital universe.

A 2009 study by the Organization for Economic Cooperation and Development, a Paris-headquartered grouping of wealthy nations, found 15-year-olds in South Korea scored highest in their ability to absorb information from digital devices, beating runners-up New Zealand and Australia by a large margin.

At Sosu Elementary School in Goesan, principal Jo Yong-deuk speaks of a future in which his students interact in virtual reality with Ludwig van Beethoven and Abraham Lincoln. In the classroom, the children scribble answers in their tablet PCs with touchscreen pens as they watch the video clip explaining the scientific properties of frozen water.

“I liked this chapter, but my favorite clip is one where they show how flowers blossom and trees bear fruit in spring,” 11-year-old Jeong Ho-seok said with a wide grin.

More than 60 primary, middle and high schools are now using digital textbooks as part of their curriculum, according to the state-run Korea Education and Research Information Service, which provides technical support for the program. Seoul believes it can finish the $2.1 billion program to build a single computer network packed with high-quality digital content by 2015. Replacing textbooks with tablet PCs will account for a quarter of that budget.

According to South Korean officials, France is handing out tablets in the Correze region and is pushing to expand digital material, while Japan began distributing tablet PCs in a primary school last year under a pilot program. Info-communications Development Authority of Singapore said on its website that Singapore began adopting tablet PCs in 2004.

But Kim Doo-yeon, a South Korean official leading the project, said his country will have no trouble competing.

South Korea is one of the most wired places on earth. More than 80 percent of South Korean households have broadband access to the Internet, according to the statistical office here. U.S. Web hosting company Akamai said earlier this year that South Korea enjoys the fastest Internet connection in the world. South Korea also ranks first in wireless broadband subscriptions, according to an OECD release last month.

The 2009 OECD study says there’s a positive relationship between students’ use of computers at home for leisure and their digital navigation skills. “Proficient digital readers tend to know how to navigate effectively and efficiently,” the study said.

Another telling example of the influence of the Internet on this nation of 50 million is the number of so-called PC rooms, or Internet cafes, which stood at 15,000 as of December last year, according to the PC room business association.

PC rooms, which usually operate around the clock, have long been the breeding ground for South Korea’s so-called professional e-gamers, whose popularity has given birth to an industry dedicated to airing their matches and promoting high-tech gadgets through them.

Enchanted with games, Jeong Yu-jin, 16, has been teaching himself programming since he was a child and is now developing a game that warns of the consequences of global warming as a player clears stages filled with challenges like angry polar bears and crumbling glaciers.

“Technology is a way for me to turn my imagination into a reality,” said the student at Korea Digital Media High School, one of many technology-oriented schools that have proliferated as electronics giants like Samsung have thrived.

“In the future, all our students will be connected to a single computer network that allows them to also learn from teachers in other countries,” Kim said.

Loaded with video, animation, photos, voices, songs and Web documents created by experts and by teachers and students, digital textbooks allow students to enjoy a custom-made learning experience, Kim said. Kids who fall behind in a regular curriculum can start from levels they feel comfortable with.

Young North Korean defectors struggling to adapt to South Korea could also benefit from having tablet PCs. More than 21,000 North Koreans, including children, have come to South Korea since the two countries’ 1950-53 war. Many choose to study in special schools to catch up before they attend regular ones.

Those who study digital technology and education have been generally positive about introducing digital textbooks, but there have also been warnings that Internet addiction may deepen among South Korea’s teenagers.

The number of students addicted to the Internet amounted to 782,000, or 12 percent of the total student population, the Ministry of Public Administration and Security said last year. The government, worried by the problem, plans to increase the number of counselors dealing with Internet addiction to 5,500 next year.

“What is essential in digital learning is to promote as much interaction between teachers and students as possible, rather than just leaving the students to themselves,” said Kwon Jung-eun, a senior researcher at the state-run National Information Society Agency.