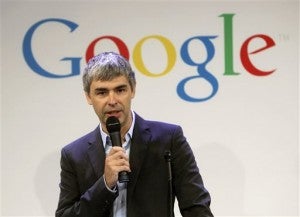 SAN FRANCISCO—Google co-founder and chief Larry Page ended the mystery about his soft, sometimes raspy voice with a personal online post Tuesday about being diagnosed with partially paralyzed vocal cords.

Medical details shared by Page on a public page at the Google+ social network explain the reason behind his puzzling absences from major company events in the last year and his tendency to speak in what seems a hoarse whisper.

Page last year also took a break from speaking for medical reasons, assuring workers at the Internet colossus that the condition was not overly serious.

His disclosure on Tuesday came just a day before the start of an annual Google gathering of software developers in San Francisco. His presence on the stage at the event was missed last year, prompting speculation about his health.

“Thankfully, after some initial recovery, I’m fully able to do all I need to at home and at work, though my voice is softer than before,” Page said. “And giving long monologues is more tedious for me and probably the audience.”

Page is known to use a microphone while speaking at even small gatherings and in a soft voice in quarterly earnings calls with financial analysts.

He said he was first diagnosed with paralysis of his left vocal cord about 14 years ago after a severe cold left him hoarse.

Doctors at the time were unable to pinpoint a cause but speculated that a virus damaged the vocal cord nerve, according to the 40-year-old Google chief executive.

“While this condition never really affected me — other than having a slightly weaker voice than normal which some people think sounded a little funny — it naturally raised questions in my mind about my second vocal cord,” Page said.

“But, I was told that sequential paralysis of one vocal cord following another is extremely rare.”

Page’s voice became hoarse again after he weathered a cold in the middle of last year, and doctors told him that his second vocal cord was also partially paralyzed, according to his Google+ post.

No cause for the condition was determined, according to Page. He told of suffering from an inflamed thyroid about a decade ago but noted that doctors never linked it to the vocal cord paralysis.

“Vocal cord nerve issues can also affect your breathing, so my ability to exercise at peak aerobic capacity is somewhat reduced,” Page said.

“Sergey says I’m probably a better CEO because I choose my words more carefully,” he continued, with a reference to Google co-founder Sergey Brin.

“So surprisingly, overall I am feeling very lucky.”

Page is using some of his fortune to fund a Voice Health Institute research program headed by Dr. Steven Zeitels of Harvard Medical School and Massachusetts General Hospital Voice Center.

Zeitels was in the spotlight about two years ago after performing vocal cord surgery on singer Adele, who went on to win a half-dozen Grammy awards.

Page invited others afflicted with similar conditions to join in the effort by sharing information in an online survey linked to his Google+ post.

“Of all the things to lose, voice is probably the easiest to make up for,” said independent Silicon Valley analyst Rob Enderle.

“People work just fine after losing their voices, and Page works for a digital company at a time when text-to-voice technology is rather sophisticated.”

Investors appeared to take the news in stride, with Google shares continuing their upward trend to close the Nasdaq trading day at $887.10 in a rise of more than tenfold from its public offering price in 2004 of $85.

Google has been a superstar of the tech sector with a stunning stock rally since the start of this year.