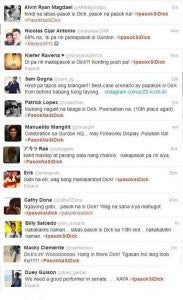 MANILA, Philippines—Off-color jokes involving the possible entry into the Magic 12 of former senator Richard Gordon, whose nickname is “Dick,” trended worldwide on Twitter on Election Day.

Social media users made full use of puns involving Gordon’s nickname using the hashtags #IpasokSiDick, which topped the global list of trending topics on the social network for several minutes, along with another one laced with double meaning: #Ereksyon2013.

But putting the jokes aside, does 13th placer Gordon, who is trailing No. 12 Senator Gregorio Honasan in partial unofficial election results, have a fighting chance to make it to the Magic 12?

Political analyst Ramon Casiple, executive director of the Institute for Political and Electoral Reform, said he believed so.

The analyst said he believed the candidates in the top 10 slots would be difficult to dislodge from the winners’ circle, including the surprising top-ranking Grace Poe, Loren Legarda, Francis Escudero and Alan Peter Cayetano, Nancy Binay, Sonny Angara, Koko Pimentel, Bam Aquino, and Antonio Trillanes.

But some six candidates are still fighting it out for the last two slots, including Gordon and the incumbent Senator Gringo Honasan.

Although he said candidates in the 13th to 16th places were still within striking distance of the Magic 12, “in terms of those who have the best chances, it’s Gordon,” Casiple said in an interview.

“The one on the 14th spot is pretty far away from him,” he said.

“Of course Honasan is in the better position because he’s No. 12,” Casiple said.

“But he can’t rest easy. One avalanche of new votes is enough to dislodge him. It’s that close,” he said.