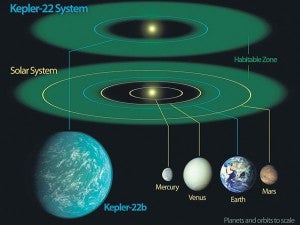 EARTH CONDITIONS This Nasa artist’s illustration shows Kepler-22b, a planet known to circle the habitable zone of a sun-like star. In another step toward finding Earth-like planets that may hold life, Nasa said the Kepler space telescope had confirmed its first-ever planet in a habitable zone outside our solar system. Confirmation means that astronomers have seen it crossing in front of its star three times. But it doesn’t mean that astronomers know whether life actually exists there, simply that the conditions are right. AFP FILE PHOTO

If engineers can’t find a fix, the malfunction could mean an end to the $600 million mission’s planet search, although the space agency wasn’t ready to call it quits Wednesday. The telescope has discovered scores of planets, but only two so far are the best candidates for habitable planets.

In orbit around the sun, 40 million miles from Earth, Kepler is too far away to send astronauts on a repair mission like the way Grunsfeld and others fixed a mirror on the Hubble Space Telescope.

NASA said the spacecraft lost the second of four wheels that control the telescope’s orientation in space. Over the next few weeks, engineers will try to repair the wheel or find another solution. The telescope could be used for other purposes even if it can no longer track down planets.

Kepler was launched in 2009 in search of Earth-like planets. So far, it has confirmed 132 planets and spotted more than 2,700 potential ones. Its mission was supposed to be over by now, but last year, NASA agreed to keep Kepler running through 2016 at a cost of about $20 million a year.

Last month, astronomers announced Kepler’s discovery of two distant worlds that are the best candidates for habitable planets. The other planets found by Kepler haven’t fit all the criteria that would make them right for life of any kind — from microbes to man.

While ground telescopes can hunt for planets outside our solar system, Kepler is much more advanced and is the first space mission dedicated to that goal.

For the past four years, Kepler has focused its telescope on a patch of the Milky Way hosting more than 150,000 stars, recording slight dips in brightness — a sign of a planet passing in front of the star.

Sobeck said there’s a backlog of data that scientists still need to analyze, even if Kepler’s planet-hunting days may be numbered.

“I think the most interesting, exciting discoveries are coming in the next two years. The mission is not over,” said chief scientist William Borucki.

In 2017, NASA plans to launch TESS — Transiting Exoplanet Survey Satellite — designed to search for planets around nearby stars.