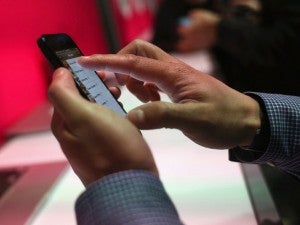 Asia’s mobile revolution is set to transform the region’s financial services industry, offering a cheap way for millions of migrant workers to send money home to their families, a report said on Monday, May 20, 2013. JOHN MOORE/GETTY IMAGES/AFP

BANGKOK—Asia’s mobile revolution is set to transform the region’s financial services industry, offering a cheap way for millions of migrant workers to send money home to their families, a report said on Monday.

Nearly 60 million migrant workers from the Asia-Pacific region sent almost $260 billion home to their families in 2012, according to the study, co-authored by the World Bank and the International Fund for Agricultural Development.

An estimated 70 million Asian households—one in 10—benefit from these flows.

Yet most Asian households receiving remittances still “live outside the world’s financial system,” particularly those from rural areas, with limited access to savings accounts, the report said.

“Mobile telephony offers the prospect of cheaply connecting hundreds of millions of unbanked rural and low-income people to financial services,” it added.

Asia is the fastest-growing market on the planet for mobile financial services, which now reach almost every town and village, enabling people to send money, transfer funds between accounts and pay bills, the report said.

Traditionally rural recipients of remittances had to travel long distances to a bank or other payout locations to receive their money in cash.

But technological advances mean that these days “mobile wallets” can be used to receive and store money for future use.

Some mobile devices also allow customers to receive money from ATMs without a bank card as well as to pay for goods and services at retail locations, even if such services are in the early stages.

In the past workers sending money home to families in rural areas faced higher remittance charges, but that is also changing.

The cost of mobile transactions is also about two percent of that of branch banking, and 60 percent of leading remittance service providers now offer mobile transfers.

“The promise of low-cost, instantaneous transfers of funds over large distances directly through mobile phones is one of the most exiting prospects in the industry today,” the report said.

But the authors also sounded a note of caution about mobile banking, saying its long-term success depended on the development of economically sustainable business models, which they warned “remains a challenge.”