Yahoo! confirms Tumblr deal for $1.1B 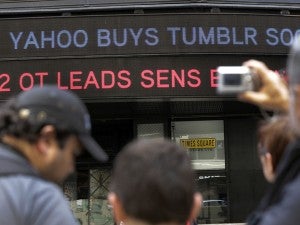 A news headline about the Tumblr sale to Yahoo scrolls on a building in New York’s Times Square, Monday, May 20, 2013. Yahoo is buying online blogging forum Tumblr for $1.1 billion as CEO Marissa Mayer tries to rejuvenate an Internet icon that had fallen behind the times. AP PHOTO/RICHARD DREW

The two firms confirmed weekend reports of the tie-up, in a deal which helps the struggling Internet pioneer connect with Tumblr’s youthful users.

The companies said the deal is worth $1.1 billion, “substantially all of which is payable in cash.”

The deal is Yahoo! chief executive Marissa Mayer’s boldest move since she left Google 10 months ago to lead Yahoo’s latest comeback attempt. It marks Yahoo’s most expensive acquisition since the Sunnyvale, California, company bought online search engine Overture a decade ago for $1.3 billion in cash and stock.

Yahoo is dipping into what remains of a $7.6-billion windfall reaped last year from selling about half of its stake in Chinese Internet company Alibaba Holdings Group. Taking over Tumblr will devour about one-fifth of the $5.4 billion in cash that Yahoo had in its accounts at the end of March.

Mayer said the fast-growing Tumblr would operate independently but that the groups would “work together to create advertising opportunities that are seamless and enhance user experience.”

“We promise not to screw it up,” Mayer said in a blog post on Tumblr, as Yahoo! moved its official company blog to the new platform.

“Tumblr is incredibly special and has a great thing going. We will operate Tumblr independently. David Karp will remain CEO.”

“The product road map, their team, their wit and irreverence will all remain the same as will their mission to empower creators to make their best work and get it in front of the audience they deserve. Yahoo! will help Tumblr get even better, faster,” Mayer added.

In a statement to “the Tumblr community,” Karp, a high school dropout who started Tumblr six years ago, said, “Our team isn’t changing. Our road map isn’t changing. And our mission—to empower creators to make their best work and get it in front of the audience they deserve—certainly isn’t changing. But we’re elated to have the support of Yahoo! and their team who share our dream to make the Internet the ultimate creative canvas.

Mayer, who worked closely with Google co-founders Larry Page and Sergey Brin during her time at the company, had high praise for 26-year-old Karp during Monday’s conference call. “David Karp is one of the most inspiring, insightful entrepreneurs that I have ever met,” she said.

The deal is expected to close in the second half of the year.

Yahoo! has been looking at a range of possible acquisitions since Mayer took the helm last year and vowed to revive the company, which has faded in the face of competition from Google.

Tumblr could be key to Yahoo!’s strategy because of its popularity with younger Internet users. A survey this year conducted by the online data group Survata found Tumblr more popular than Facebook among those aged 13 to 25.

While Tumblr generates very little cash, bringing it in the Yahoo! family could offer the potential for new advertising and other revenue sources.

Roger Kay at Endpoint Technologies said the deal “brings a social element that Yahoo! is missing and a set of new users.”

But Kay added that “paying $1.1 billion for a company with $13 million in revenue seems a little nuts to me… Those numbers aren’t even earnings, which are surely negative. So, even if Tumblr survives intact, Yahoo is unlikely to get its $1.1 billion back over any interval that falls within a human lifetime.”

Founded in 2007 and headquartered in New York, Tumblr says it has more than 108 million blogs, 50 billion postings in 12 languages and 175 employees. The website ranking site Alexa lists Tumblr as number 32 in terms of global popularity.

Tumblr will now play a pivotal role in Mayer’s attempt to reshape Yahoo. To take on the challenge, Mayer ended a highly successful 13-year career at Google, which she helped surpass Yahoo as the Internet’s most influential company. Since coming to Yahoo, Mayer has concentrated on improving employee morale, redesigning services and bringing in more engineering talent through a series of small acquisitions that have collectively cost less than $50 million.

Yahoo will still focus on mostly small deals, Mayer said. She seized the opportunity to buy Tumblr because she believes the service can accelerate her efforts to turn around Yahoo.

Only 3 of 4 NAIA terminals to operate