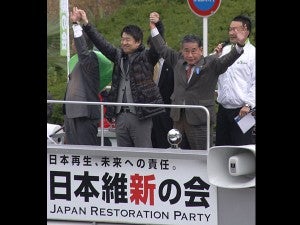 In this Nov. 23, 2012 photo, Osaka Mayor and co-leader of the Japan Restoration Party Toru Hashimoto, foreground center, along with Shingo Nishimura, foreground right, a former member of the House of Representatives, waves to supporters during their party’s election campaign in Sakai, Osaka prefecture, western Japan. Hashimoto apologized after saying, and later tweeting, that sex slavery by Japan’s Imperial Army before and during World War II was a “necessary” wartime evil and suggesting that the U.S. military patronize adult entertainment to help reduce sex crimes committed by American troops. AP/Kyodo News

TOKYO — On the Internet, no one can save you from yourself. That is a lesson many Japanese politicians have learned recently in painful, awkward and at times costly fashion.

In the latest flap, a senior reconstruction official in charge of helping victims of the Fukushima Dai-ichi nuclear crisis was dismissed last week after he used a scatological insult on Twitter to deride civil activists.

Another official’s loss of composure at a U.N. committee meeting might have gone unnoticed in another time, but today it’s on YouTube. Even Prime Minister Shinzo Abe has been reproached for remarks on Facebook that some deemed disrespectful to his opponents.

Japan only began allowing use of social media in political campaigns in April. As campaigning heats up for a pivotal July 21 election for the upper house of parliament, this relatively new tool for reaching the public appears as much a liability as it is a blessing.

Japanese politicians and government agencies control access to information through a system of press clubs, and to keep their memberships, traditional Japanese media often have overlooked politicians’ gaffes. Politicians’ aides also help them avoid making embarrassing comments on TV and in print media. But those filters disappear when a politician posts a comment online.

“It takes only one emotional sentence. Once you hit the comment or tweet button, it’s too late. You’re caught by gaffe watchers on the net, with your true nature exposed,” said Junichiro Nakagawa, an editor at the Internet news site Shunkan Research News.

Yasuhisa Mizuno, the former Reconstruction Agency official for Fukushima-Dai-ichi victims, was fired over this tweet: “Attended a meeting where I was merely yelled at by leftist (vulgarity). Surprisingly, I’m not outraged. I only have pity for their lack of intelligence.”

He posted the comment March 7, but it was overlooked for several weeks before “gaffe watchers” discovered it and made it more widely known.

In late May, Hideaki Ueda, Japan’s representative to the United Nations’ committee on torture, shouted while defending Japan’s judicial system against criticism by an envoy from Mauritius who said its lack of protections for suspects’ rights was “medieval.”

Speaking in somewhat broken English in footage shown on YouTube and an official website, Ueda said, “Certainly Japan is not the Middle Age. We are one of the most advanced country in the field.”

To giggles from the audience, he shouted, “Don’t laugh! Why you are laughing?”

“Shut up! Shut up!” he said. By Wednesday the video had been viewed on YouTube more than 200,000 times. The footage was also repeatedly shown on mainstream Japanese TV and in newspapers until the Foreign Ministry reprimanded him last week.

Osaka Mayor Toru Hashimoto said and tweeted that sex slavery by Japan’s Imperial Army before and during World War II was a “necessary” wartime evil. He also used Twitter to post his suggestion that the U.S. military patronize adult entertainment to help reduce sex crimes committed by American troops.

U.S. officials characterized the comments as “outrageous and offensive.” Hashimoto, a co-founder of the nationalist Japan Restoration Party, apologized, but only for his adult entertainment remark. He has continued tweeting his assertions about the Imperial Army’s use of prostitutes.

Sophia University political science professor Koichi Nakano said gaffes by politicians and others spotlight a lack of sensitivity to a variety of issues, and to opposing views.

“The society that leaves such problems unchecked could become one that is insensitive,” Nakano said. “People gradually lose sensitivity and then think nothing of it anymore.”

One word that has drawn attention is “leftist,” which is being used as a catch-all term for liberals supportive of minority rights and pacifism, and who sometimes challenge conservative values.

The media and the political opposition are taking Abe to task for using the term too casually. Abe has also called former Prime Minister Naoto Kan a leftist, criticizing his civil activist background and relatively lenient stance toward North Korea.

Abe, who is known for his nationalist and hawkish views, complained in a recent Facebook entry about hecklers at a public rally. “A group of leftists came into the crowd, intensely trying to interfere with my speech by shouting into a loudspeaker and banging drums, full of hatred,” he wrote

“Mr. Abe, what do you mean by ‘leftists?'” asked Hideo Matsushita, senior editor at the liberal-leaning Asahi newspaper, in a commentary published Sunday.

Many of the hundreds of comments attached to Abe’s Facebook entry expressed support for his remark, along with hatred of the political left, ethnic Koreans and China. But others questioned for using the word “leftists” to describe hecklers who were apparently opposing Abe’s plans to join a U.S.-led trans-Pacific trade bloc.

Matsushita said Abe showed a lack of respect for dissent and was fanning animosity toward Japan’s neighbors and ethnic minorities.

“What’s the point of making a distinction between the left and the right?” he asked.

Since taking office in December, Abe has mainly focused on the economy. But his wider agenda includes revising Japan’s pacifist constitution to allow a stronger military and building what he calls a “beautiful country” through patriotic education, traditional family values and respect for the emperor. Some critics say his plans harken back to the militaristic atmosphere prevailing before and during World War II.

The emergence of Hashimoto’s Japan Restoration Party and the Liberal Democrats’ victory in December elections is seen by many in Japan as a swing to the right that has been accompanied by verbal attacks on Japan’s sizable ethnic Korean minority both on the Internet and in street protests, where members of ultra-rightist groups have shouted threats like “Kill Koreans” and “Go back to Korea.”

Hundreds of thousands of Koreans comprise Japan’s largest ethnic minority group. Many are descendants of workers shipped to Japan during its 1910-1945 colonial rule of Korea. Decades later, they still face widespread discrimination in education, business and marriage.

Anti-Korean sentiments have prompted a group of lawmakers and experts to propose excluding “hate speech” from the constitutionally guaranteed right to freedom of expression.

“These problems underscore Japan’s lack of human rights awareness, and the world is raising its eyebrows,” said Kazuko Ito, a lawyer who heads Japan’s branch of Human Rights Now.