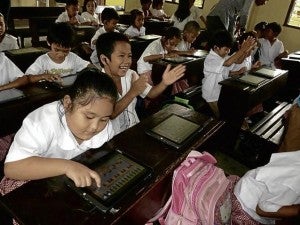 The Filipino-developed Mathematics courseware for tablet PC has resulted in improved student performance among Grade 1 pupils since it provided a fun way of learning Math concepts. PHOTO FROM ISIF.ASIA

MANILA, Philippines—The Department of Science and Technology (DOST) has called on Filipino netizens to vote online for a specially developed set of Mathematics lessons that could be taught to Grade 1 pupils using tablets for a better understanding of the subject.

The all Filipino-developed Mathematics courseware for tablet users has been nominated in this year’s Information Society Innovation Fund (ISIF) Asia Awards, which recognizes innovative yet socially relevant IT projects in the Asia-Pacific region.

The public voting through the ISIF website http://isif.asia/projects/projects/view/346 is until Wednesday, June 26.

The project resulted in improved student performance among Grade 1 pupils since it provided a fun way of learning Math concepts through affordable tablets.

The Grade 1 Math courseware has 10 lessons.

The modules were developed by Filipino educators, graphic artists and programmers who adapted the lessons into the Philippine context to make them familiar to the pupils.

After the successful pilot of the Grade 1 modules, the DOST developed other Math modules for Grades 2 to 6.

The development and pilot testing of the modules for the other grade levels will end in 2014.

The DOST has also begun to develop Science modules for elementary school pupils.

The modules may be downloaded for free from the website courseware.dost.gov.ph.

It was developed with the help of the Department of Education, National Institute of Science and Mathematics Education, Science Undersecretary Fortunato de la Peña, Dr. Queena Lee-Chua of Ateneo de Manila University and Dr. Rowena Guevarra of the Philippine Council for Industry, Energy and Emerging Technology Research and Development.

“We call on the people to get online and vote for this innovative project. Let us harness our resources and propel this project to the top spot,” said SEI director Dr. Filma Brawner.

“This nomination is a good recognition of our collective effort in embracing innovation as we seek to improve Science and Math education in the country,” she added.

Placed under the category of “Innovations on Learning and Localization,” the Mathematics courseware project will compete with 21 other projects from the region.

Aside from the major awards up for grabs, a Community Choice Award will be given to the project that gets the highest number of online votes.

The winning project gets A$3,000 including a travel grant to attend the awards ceremony.