Help at hand for those wanting to detox from technology 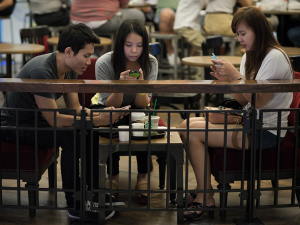 This picture taken on March 19, 2013 shows friends looking at their smartphones at a coffee shop in a shopping mall in Bangkok. AFP

PARIS – Tired of checking your smartphone every few minutes for new emails, likes or retweets? Do you spend more time looking at your device than chatting to your date? Are you close to a digital burn-out?

Fear not, an increasing number of options are available for those seeking to detox from technology, from wallpaper that blocks wi-fi to Internet-free holidays and software that forces you off addictive sites.

“People connect all the time, everywhere, in every position — lying down on their bed, at the restaurant, in the waiting room,” says Remy Oudghiri, a director at French polling firm Ipsos and author of a book on the subject.

More and more people own devices that allow this. In the United States, over half of adults now have a smartphone, while more than a third own a tablet computer.

“This sudden surge in connection possibilities, after the initial period of enthusiasm, prompts every user to reflect on how to continue to enjoy life while taking advantage of their connection. How to avoid becoming dependent,” Oudghiri said.

French researchers have come up with one solution, creating a special type of wallpaper that blocks wifi, which materials company Ahlstrom is busy developing further with the aim of putting it on the market next year.

Spokesman Robin Guillaud says there has already been significant interest in the invention. Schools in particular have made enquiries, keen to prevent students from spending too much time hooked to their smartphones.

According to an Ipsos survey, nearly a third of French people now feel the need to disconnect, with similar trends recorded in other countries.

Separate research from the same firm found that in 2006, 54 percent of the French population felt people spent less time together due to the advent of new technologies, a figure that leapt to 71 percent last year.

Companies have latched onto this lassitude, particularly in the tourism industry where some hotels and resorts offer digital detox packages.

The upmarket Westin hotel in Dublin, for instance, gives guests the option to surrender their smartphones and tablets on check-in and provides them with a detox pack that includes a tree planting kit and a board game.

Other firms are offering more in-depth packages to really get away from it all. The US-based Digital Detox organises tech-free retreats to remote places in the United States or escape destinations such as Cambodia.

“Some of it is marketing”, said Thierry Crouzet, a blogger who went cold turkey and disconnected for six months.

“There are loads of places that are tranquil. No need to book a tour operator that takes you to the North Pole.”

The 49-year-old wrote a book about his experience called “I unplugged”, after suffering from a digital burn-out that saw him so craving technology that he would sometimes check his email, blogs and Twitter at night.

“I see a lot of blogger friends who are easing off. Nearly everyone gradually takes breaks. We’re realising that at the end of the day, it (technology) doesn’t nourish us,” he said.

But Crouzet admits that as a blogger who was going to write a book about his experience, it was easier for him to disconnect than it is for thousands of people who rely on email for work.

As a result, some companies are implementing measures to try and relieve employees from being contactable 24/7.

German car maker Volkswagen, for instance, in 2011 decided to stop sending emails to thousands of employees’ Blackberrys between 6.15 pm and 7:00 am.

When all else fails, Internet rehabs are starting to spring up, such as reSTART, which bills itself as the first retreat centre programme in the United States.

According to its website, most of those they treat are between 18 and 28, and have checked in because they have had difficulty finishing college due to their Internet use, or establishing and maintaining off-line relationships.

The programme aims to teach participants about healthy eating, getting good sleep and how to address difficult emotions head-on rather than escape online.

The jury is out, however, as to whether those hooked on technology suffer from an actual addiction.