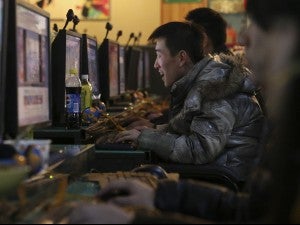 In this Dec. 28, 2012 photo, people use computers at an internet cafe in Xiangyang city, in central China’s Hubei province. China’s population of Internet users has grown to 591 million, driven by a 20 percent rise over the past year in the number of people who surf the Web from smartphones and other wireless devices, an industry group reported Wednesday July 17, 2013. AP

BEIJING— China’s population of Internet users has grown to 591 million, driven by a 20 percent rise over the past year in the number of people who surf the Web from smartphones and other wireless devices, an industry group reported Wednesday.

The end-of-June figures from the China Internet Network Information Center represent a 10 percent rise in total Internet use over a year earlier. The number of wireless users rose to 464 million.

The communist government encourages Internet use for business and education but tries to block access to material deemed subversive or obscene. The rise of Web use has driven the growth of new Chinese industries from online shopping and microblogs to online video.

The latest growth raised the percentage of China’s population that uses the Internet to 44 percent, according to CNNIC.

Internet companies are scrambling to respond to the explosive popularity of smartphones, tablets and other wireless devices by rolling out services made for them.

This week, the operator of China’s most popular search engine, Baidu Inc., announced it will pay $1.9 billion to acquire a distributor of smartphone apps, 91 Wireless Websoft.

Authorities tightened online controls last year after social networking and other websites played a key role in protests that brought down governments in Egypt and Tunisia.

Also last year, regulators tightened controls on video, requiring providers to prescreen all material before posting online after officials complained some content was vulgar, pornographic or too violent.