With 106 million users around the world as of August 6, KakaoTalk hopes to tap into the voracious social appetite of Filipinos despite the already saturated free social app market.

Tim Jang, Kakao Philippines director, cited figures from a comScore study which found that the Philippine Internet audience has grown by 22 percent since March 2012, the fastest in Southeast Asia.

“We are confident that we will be able to provide the right product at the right time to satisfy the needs of the local consumers,” Jang said.

“The country has been especially robust in the past years and we are confident that KakaoTalk will do well in such a promising environment,” he said.

Among the features of KakaoTalk are free voice calls to individuals, group call with up to five contacts, instant messaging and group chat, and animated emoticons.

The app has a unique scheduling feature that allows contacts in a group to set events and notify all the members in a group. 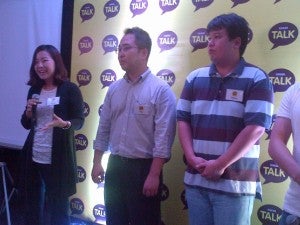 Sonia Im, Kakao Global PR lead, answers questions from the media during the launch of KakaoTalk in the Philippines. KakaoTalk is Korea’s biggest free social messaging app with over

A polling feature allows contacts in a group to vote on select issues set by anyone in a group.

Games can also be played using the KakaoGame feature which allows third party games to be downloaded.

Celebrities and famous brands can be added as friends in KakaoTalk’s PlusFriends feature where they can regularly update their followers on events and special promotions..

A Giftshop feature also allows users to purchase items and give them as gifts to other contacts. The recipient of the gift can then show the received item in the store to claim it.

KakaoTalk is available on iOS, Android, Blackberry, Windows Phone, and PCs. It is also available in 13 languages in countries all over the world.