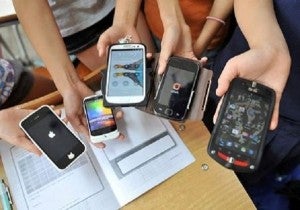 MANILA, Philippines — This gang of robbers preys on buses with Wifi Internet access, knowing that the passengers are likely to have many mobile phone and Internet-related gadgets.

Five alleged robbers were arrested early Thursday right after a heist at a bus along EDSA in Quezon City.

Two cellular phones belonging to two passengers were recovered from the suspects, who were collared by operatives of the Quezon City Police District’s Criminal Investigation and Detection Unit.

Charges of robbery and illegal possession of deadly weapon were being prepared against Jeffrey Roma, 30; Christopher Cutamora, 39; Jim Lord Paraiso, 32; Domingo Corporal, 33; and Ramon Pura, 43, all of Pasig City.

Police Officer 2 Rhic Pittong, the case investigator, said the men were apprehended at around 12:05 a.m. near the corner of EDSA and White Plains Avenue.

A team of operatives has been conducting nightly patrol in the area due to reports of robberies aboard buses.

Senior Police Officer 1 Apolonio Basit, one of the arresting police officers, said the robbers would often prey on buses with free Wifi Internet access, thinking that “the passengers would have high-tech gadgets and cellphones.”

Basit and his team were conducting surveillance operations in the EDSA Ortigas area when they noticed a commotion on a Taguig Metrolink bus, which passed them by.

The operatives chased the bus and flagged it down near White Plains Avenue, only to find out that a heist had just happened.

Two passengers complained that robbers were onboard, pointing to the five men who hid fan knives and scissors.

Two cell phones belonging to the victims were recovered from the suspects, who ended up getting arrested on the spot.