Angry netizens: Getting worse by the minute 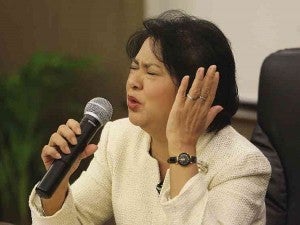 MANILA, Philippines—“This is getting worse by the minute!”

So tweeted netizen (@RaqZR), minutes after @inquirerdotnet posted the story quoting Commission on Audit (COA) Chair Grace Pulido-Tan, as saying that there was “one Luis Abalos who was not a member of Congress (who) received P20M.”

Reader sacrebleau commented, “This is proof na pag pinabayaan mo ang COA, BIR, DOJ na gawin ang kanilang trabaho, walang makakalusot. Pag walang makakalusot, gaganda ang buhay sa Pinas  (This proves that if you let the COA, the Bureau of Internal Revenue and the Department of Justice do their jobs, nobody would go scot-free and life would get better in the Philippines).”

The COA report indicated that 74 lawmakers got more than their share of the Priority Development Assistance Fund (PDAF) during the previous administration from 2007 to 2009.

Netizen berong expressed exasperation when he posted his comments on Inquirer.net, “Lintek talaga. Baka isa ako sa mga NGO beneficiaries dyan ha. board passer din ako. wala akong natatanggap. Ngayon pa lang, sinasabi ko na  (What the heck. I might be listed as one of the NGO beneficiaries since I’m also a board passer.  I didn’t receive anything, let me just say that now.)”

He was reacting to the COA revelation that the names of some incorporators of the fake NGOs were plucked from the list of passers of the board and bar exams.

Some readers posted their conspiracy theories about the COA report.

“Dominoes will start to fall, no doubt about it. The House (of Representatives) is a house of cards. Time for change. COA, belated or not, should publish the results of their audit. It is a spider’s web and all the strings should lead to the den of thieves who are still perpetrating this kind of plunder of the government coffers. Tama si Ms Napoles, hangga’t may gobyerno, may pera  (Ms Napoles was right: As long as there’s government, there’s money to be had),” commented reader farmerpo an hour after the report was released online.

Netizen joe__bloggs had another theory in mind.  He wrote:  “It took all these years for COA to produce this report on PDAF for 2007-2009. At this rate, all the horses would have bolted, so to speak, we cannot wait that long! Why wait more years for the 2010-present report? Obviously COA could not give this investigation its priority. So give the job of auditing the PDAF for 2010-present to KPMG, SGV, et al. if we want to see the report in our lifetime.”

Commented  netizen speedstream2: “Isn’t this in the league of a big-time conspiracy to hoodwink hardworking taxpayers, resulting in the leakage of millions of public funds?”

Twitter user (@GreenMinds) connected the anomaly to the need to pass the Freedom of Information bill, “you see the potential of #FOI? Ordinary citizens willing to go over a very long document. Just imagine if this is possible for all govt records.”

Similarly, netizen huey_4ph believes that in light of the pork barrel scandal, the country needs a “social revolution” posting. He posted: “I am calling  those people who love this country to mobilize and petition the Senate for a probe. It is high time to investigate this multibillion scam and it involves lawmakers. We cannot sit here and watch. There must be something to be done to punish these people regardless of who they are. Where are the militant Bayan members? I expect them to hold their banner in front of the Senate and protest and demand investigation.”

TOPICS: COA, Commission on Audit, Grace Pulido-Tan, netizens
Read Next
Facebook to test mobile payments service
EDITORS' PICK
Mandaluyong fire put under control hours after it started
Leveling up your ‘lutong bahay’ with the kitchen companion you never knew you needed
Bato de la Rosa, Risa Hontiveros back bill increasing female recruitment quota in PNP
Quarantine violations still punishable despite deleted provisions in ‘Bayanihan 2’ – Bato dela Rosa
Someone from the Philippines can become $356 Million richer this Tuesday
Cherry Mobile teams up with Cloud Panda PH, launches online store
MOST READ
‘If I had not been SolGen, I will make you eat your words,’ Calida tells Coco Martin
5 car dealership outlets shutting down
51 percent of German firms holding back investments in PH, but not because of COVID-19
Senate OKs bill authorizing president to postpone opening of classes beyond August
Don't miss out on the latest news and information.