Samsung to unveil ‘smartwatch’ next month—reports 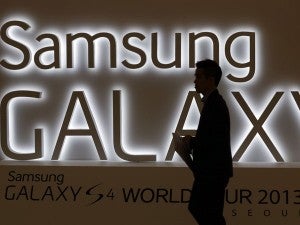 In this photo taken on April 25, 2013, a man walks by a logo of Samsung Electronics Co.’s latest smartphone Galaxy S4 during its unveiling ceremony in Seoul, South Korea. Samsung has applied for US and South Korean trademarks for a watch that connects to the Internet in the latest sign that consumer technology companies see wearable devices as the future of their business. AP

The Galaxy Gear, which will allow users to make calls, access e-mail and even surf the Internet, will launch on September 4, said the sammobile.com site.

The world’s top handset maker will also launch its new Galaxy Note 3 on that day, the site reported.

Bloomberg said the first version of the smart watch would not have a flexible screen.

Wearable computing, including Google’s Glass eyewear, is considered as the next frontier in consumer electronics following smartphones.

In June, Sony unveiled the latest version of its SmartWatch, which links with smartphones to receive alerts about phone calls, e-mails and updates from social networks and also includes a music function.

Samsung’s US rival Apple has long been rumored to be working on introducing an “iWatch,” which would represent the biggest gadget launch by the firm since the iPad mini last year.