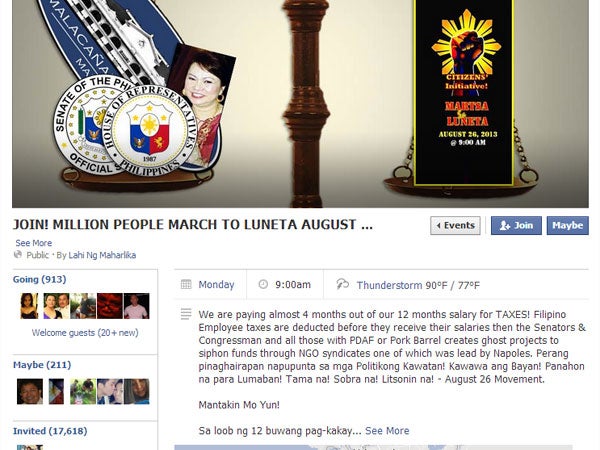 One of the page made for Million People March to Luneta. Screengrab from Facebook.com

MANILA, Philippines – Anger in social media at the misuse of Philippine state funds has snowballed into calls for a rally expected to attract thousands, an organizer said Sunday.

Calls for a “Million People March” scheduled for Monday began circulating on Facebook and Twitter about two weeks ago after local press reports of a scam involving the Priority Development Assistance Fund.

The fund is money allocated for lawmakers to be used in development projects. Critics see it as funding “pork barrel” projects which have traditionally been a source of corruption.

At the center of the controversy is businesswoman Janet Lim Napoles who allegedly connived with legislators to siphon off some P10 billion from the fund.

“We demand transparency and accountability,” the organizers said in their online invitation on Facebook. “Abolish pork barrel.”

One of the organizers, Peachy Rallonza-Bretana, said the idea for the march originally circulated among her circle of friends but quickly caught on.

“There really is no group organizing this,” she told the Philippine Daily Inquirer, adding it was “snowballing at great speed.”

As of Sunday afternoon, nearly 18,000 people had said they would join marches culminating in what the organizers said would be a peaceful “picnic get together” in Luneta Park.

Activists in other cities have said they would hold simultaneous marches in support of the Manila protest.

“We are aghast, disgusted and enraged at such a wanton display of shamelessness by those who we elected to serve and protect the people,” read a manifesto of support signed by some alumni of the elite Philippine Military Academy who are no longer on active duty.

“We cannot and we will not tolerate this anymore even those from among our own,” it said.