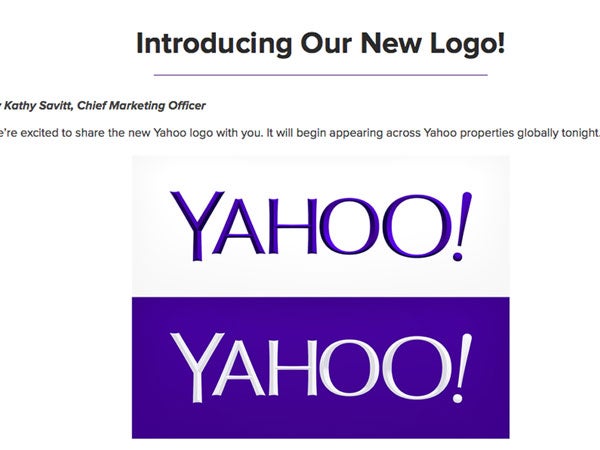 This screen grab made from Yahoo Inc.’s Tumblr page shows the company’s new logo in a post published on Wednesday, Sept. 4, 2013. Yahoo News named a new editor-in-chief Monday, Sept. 10, 2013, who comes from The New York Times and promised a “major expansion” of news gathering at the US Internet giant. AP/YAHOO INC.

SAN FRANCISCO—Yahoo News named a new editor-in-chief Monday who comes from The New York Times and promised a “major expansion” of news gathering at the US Internet giant.

Megan Liberman, deputy news editor of The New York Times, started on Monday, taking the position which has been vacant since Hillary Frey left earlier this year.

Liberman “will lead a major expansion of Yahoo News, bringing in new voices and defining features for the site,” the company said in a statement, noting that she would “focus primarily on original reporting, social news gathering, video and live events coverage.”

“Megan is a dynamic addition to the Yahoo News team,” said Robertson Barrett, vice president of Yahoo News and Finance.

“As deputy news editor at The New York Times she drove some of the most successful digital initiatives, from its blog network to Nate Silver’s multi-platform presence to live streamed coverage of the 2012 elections.

“She is a natural fit to lead editorial for the world’s largest news site, and she will help us take Yahoo News to the next level.”

At the Times, Liberman previously worked as deputy editor of the newspaper’s magazine, where she was responsible for digital features and strategy. She also directed the magazine’s political coverage, and launched the Times’s parenting blog, Motherlode.

Yahoo News is the most visited news website, according to the Web information site Alexa. The analytics website eBizMBA estimates it gets 110 million unique visitors monthly.