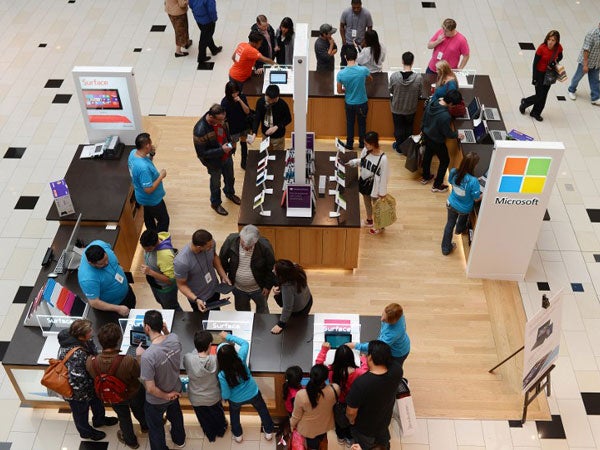 People look at Microsoft Surface tablets at a shopping mall in Glendale, California, on December 26, 2012. Microsoft on Monday, Sept. 9, 2013, sent out invitations to a September 23 event at which it is expected to unveil new Surface tablets to challenge iPads and Android devices dominating the market. AFP FILE PHOTO

SAN FRANCISCO—Microsoft on Monday sent out invitations to a September 23 event at which it is expected to unveil new Surface tablets to challenge iPads and Android devices dominating the market.

The event to be held in New York comes as the US technology giant struggles to remain relevant as Internet age lifestyles shift from traditional computers to smartphones and tablets.

E-mail invitations to the “Surface NYC event” revealed little more than time and place details displayed over a graphic image of a Surface tablet and matching keyboard.

Microsoft last month knocked $100 off the price of high-end versions of its Surface tablet, which is competing against Apple’s iPad and devices that use Google’s Android system.

The software giant’s online store is offering US consumers the Surface Pro for $799 or $899, depending on memory capacity, down from $899 and $999 respectively.

The Surface RT is a basic version of the tablet, which got a 30 percent price cut earlier in the year after failing to gain traction in the market.

The promotion came on the heels of shabby tablet sales that resulted in Microsoft taking a $900 million charge against fourth-quarter earnings, which closed at the end of June.

The charge exceeds sales of the tablet since it was launched at the end of October 2012, estimated by the company at $853 million.

Surface was introduced to showcase Microsoft’s new Windows 8 operating system, which was launched at the same time in a bid to make up for ground lost to Apple and Google in the mobile domain.

Pressure on Microsoft to avoid becoming obsolete in the rapidly evolving technology world has triggered an overhaul of Windows; early retirement plans for chief Steve Ballmer; and the multibillion-dollar buy of Nokia’s handset business.

The deal worth $7.2 billion (5.44 billion euros) gives Microsoft Nokia’s mobile phone operations along with an array of patents and licenses to help compete with rival platforms.

The deal also moves Nokia chief executive Stephen Elop, who was hired from Microsoft in 2010 to turn the company around, back to his former firm, and makes him a likely candidate to succeed Ballmer when he retires.

Microsoft chief executive Steve Ballmer has announced he will retire by August of next year.

Ballmer took over as CEO in 2000 from co-founder Bill Gates, a classmate and friend from their days at Harvard University in the 1970s.

When Ballmer took over, Microsoft was the undisputed tech sector leader, and the world’s largest company in market value. But in recent years it has struggled as consumers move from desktop and laptop PCs to mobile devices.