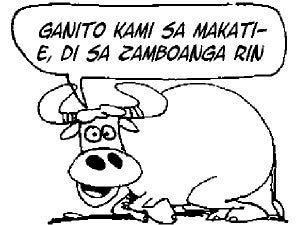 He appears to be swinging into campaign mode a little too early.

At least that’s what netizens say of Vice President Jejomar Binay, known to be planning to seek the presidency in 2016, after heading to Zamboanga City in an attempt to discuss a truce with Muslim rebels holding scores of civilian hostages.

As the military and police pursued efforts to end the almost weeklong standoff, Binay announced close to midnight on Friday that Misuari, his college classmate, and Gazmin had agreed to cease firing to pave the way for a “peaceful settlement.”

Hostilities, however, continued into its sixth day, with Gazmin and the military saying no ceasefire was implemented as the MNLF continued firing at government troops. Binay pushed through with his trip to Zamboanga accompanied by his son, Makati Mayor Junjun Binay.

What followed was collective confusion expressed in 140 characters or more.

“Promoting a fake ceasefire should get you fired,” said user @tweetnirizal, a parody account of national hero Jose Rizal.

Tweeting the Inquirer (@inquirerdotnet), user Ches (@chesaq) could not help but ask: “What the… epal move Binay? Too early for 2016.” Epal is colloquial shorthand for the Filipino term “mapapel” or attention-seeking.

Binay’s political rival, Interior Secretary Mar Roxas, has been on the ground in Zamboanga City since early last week along with other Cabinet officials pursuing efforts to end the conflict.

Froilan Grate (@GreenMinds) suspected a story line behind what was happening: “I first thought #ZamboCrisis can’t be part of a script. No decent person would sacrifice so [many] lives for political gains. Then there’s Binay.” 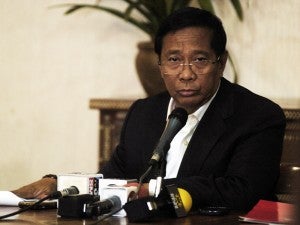 “Roxas, Gazmin, Soliman, Aquino… Binay, ayaw patalo (would not be left behind). Papunta na din ng (He’s on his way to) Zamboanga. Para ano po (What for) Vice?” she said.

Inquirer readers also chimed in, criticizing the Vice President for the announcement that did not pan out.

A reader signed in as Bayang Magiliw said Binay’s “hunger for publicity backfired” while Oscura said the Vice President’s actions undermined the authority of Mr. Aquino, the commander in chief.

Reader Jack BW, who echoed this sentiment, said: “This will keep on happening to us until we grow the balls to take it all the way. Misuari and his commanders should be held accountable. The [Vice President] shouldn’t be allowed to make his own moves without the approval of the President.”

Told about the online reaction, Binay’s camp declined to comment and said to instead wait for developments from the Vice President’s visit to Zamboanga. (See story on Page A1.)

A spokesperson for the Vice President said, however, that Binay had talked to Misuari on Friday night to propose a ceasefire that would take effect at midnight on Saturday.

“He talked to Misuari and he talked to Gazmin, and they agreed to discuss a ceasefire,” spokesperson Joey Salgado told the Agence France-Presse early Saturday.

Binay tweeted just before noon that he was on his way to join President Aquino in Zamboanga to discuss the details of his plan with the defense secretary and representatives of the MNLF.

‘Trying to insert himself’

But a Cabinet member told the Inquirer that Vice President Jejomar Binay has not been authorized by Mr. Aquino to negotiate a truce with Nur Misuari.

The Cabinet member confirmed on Saturday that Binay was negotiating with Misuari, or his loyal followers, on his own.

The secretary did not want to be named since he was not authorized to comment on Binay’s actions.

“He (Binay) is trying to insert himself. He’s jeopardizing the safety of the troops because of politicking,” the official said.

The secretary also said there had been no truce between government troops and Moro rebels.

Before midnight on Friday, the Inquirer immediately contacted several Palace officials after Binay had reportedly negotiated a truce with Misuari, which was to take effect that night.

But two Palace officials, who were privy to the situation on the ground, expressed surprise.

“I’m sorry, I am not aware of that,” said National Security Adviser Cesar Garcia in a text message.

Gazmin confirmed that he did talk to Binay on the phone around 10 p.m. or 11 p.m. on Friday.

“This started with the Vice President calling me up, asking me what if he talks to Misuari because he was his classmate and seatmate. [Binay said], ‘What if we talk about a ceasefire?’ I said, ‘Why not, if only to end this bloody confrontation,’” Gazmin said.

Gazmin recalled Binay saying that the government would “initiate a ceasefire.”

“I said a ceasefire could only start when they (the MNLF) stop firing because we will only be reactive to their actions. The truce didn’t happen because in the first place, [the MNLF] kept on firing that’s why the soldiers are making counter fires. So there was no ceasefire,” Gazmin said.

The defense chief also said he never spoke to Misuari.

“It was being arranged that we talked through an intermediary but I said they should show good faith first. But there was no good faith so what’s the point talking about a ceasefire?” Gazmin said.

However, Gazmin said the doors remained open for a truce.

“We will exhaust all available means of peaceful resolution but we ensure that the safety of the civilians will be paramount,” he said.

While observers differ in opinion about having too many government officials on the ground, political analyst Clarita Carlos sees nothing wrong with getting the full force of government in resolving the Zamboanga crisis.

“What’s important is they are speaking with one voice and they are telegraphing only one point,” Carlos told the Inquirer.

Carlos said now was not the time to “quibble” about bureaucracy. Whoever “is trusted” in the government who can offer a way to end the crisis peacefully and reasonably should pitch in.

“I suspect [Binay] didn’t do it [arbitrarily]. The way I have known Binay, he is a peace-loving man,” Carlos said.

For Carlos, what is important too is that the government finally addresses the 1996 peace agreement, which is at the heart of the rampage of Misuari’s men in Zamboanga City.

“The big issue is the 1996 peace agreement with the MNLF … It is understandable for the MNLF to feel marginalized even if they were the first to have the peace agreement that was brokered by the international community,” she said.

Carlos said the government should “listen” to Misuari and the other MNLF leaders. “They have grown old already. They have grievances. Just listen to them,” Carlos said.

For security analyst Jose Antonio Custodio, the government’s reaction to the Zamboanga crisis is “typical of how we have responded to emergencies.”

“It is always difficult controlling the ground. We cannot control the usiseros. What more the VIPs who want to be there as well?” Custodio said.

Custodio is concerned that the presence of the top officials led by Mr. Aquino himself could pose problems in terms of command and control of the ground commanders.

“Instead of concentrating on the hostages, the military would have to coordinate with whoever is the VIP there … there are too many people, high ranking at that, going into the critical phase of the crisis … It can distract the commanders,” Custodio added. With a report from AFP

Aquino, Binay to meet in Zamboanga