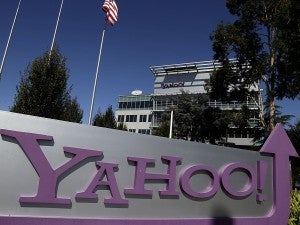 SPH, which publishes Singapore’s Straits Times newspaper and other dailies, in November 2011 asked the city-state’s High Court to stop Yahoo! from further reproducing articles from its newspapers and pay unspecified damages for copyright infringement.

A joint statement by both firms released Monday said Yahoo! Asia Pacific “acknowledges that it has, in connection with its Yahoo! Singapore News site, reproduced content from SPH’s newspapers without SPH’s approval.”

“As publishers, Yahoo! companies strive to respect the intellectual property rights of others wherever they do business,” the statement said.

“The actions here by a small number of Yahoo! Asia Pacific employees are deeply regretted. The responsible employees have been disciplined or terminated,” it added.

The statement said Yahoo! Asia Pacific has paid damages and costs to SPH, but did not specify the amount.

The US firm has also undertaken not to “knowingly or intentionally infringe SPH’s copyrights.”

The move is a reversal of the Sunnyvale, California-based company’s initial position in 2011, when it rejected SPH’s allegations and filed a counterclaim.

In court documents, the Singapore publisher cited 23 news articles which it said Yahoo! reproduced without permission over a 12-month period, including political and crime stories first published in the print editions of the Straits Times, The New Paper and My Paper.

Yahoo! in turn argued that copyright laws do not protect facts and information. It also claimed SPH reproduced without authorization several Yahoo! articles and pictures on STOMP, a citizen-journalism website owned by SPH.

Yahoo! is one of the top online sources of news in Singapore, along with the Breaking News section of the Straits Times website, both of which can be accessed free of charge.

Both are competing for online advertising revenues along with Microsoft’s MSN, which has a news tie-up with Singaporean broadcasting-based group MediaCorp.

SPH is one of Asia’s biggest media-based groups, with a near monopoly of Singapore’s daily newspaper market and prime property assets.

Group revenue in its financial year ending August 2012 was down 9.4 percent from a year ago at Sg$1.25 billion ($995 million), but revenue from its newspaper and magazine business was up four percent at Sg$1.01 billion, according to its annual report.