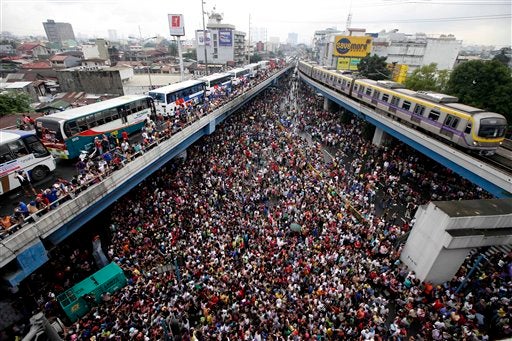 MANILA, Philippines — An evangelical mission of the Iglesia ni Cristo, which drew hundreds of thousands on Monday, snarled traffic across the metropolis, irking commuters and motorists on their way to work.

Even Supreme Court spokesperson Theodore Te went on a rant on Twitter, saying España and the peripheral roads were turned into parking lots.

“3 hours to reach work and to think I took the advisories seriously, left early and planned my route,” Te said in his Twitter handle @TedTe.

He said going to work from Malate by driving would normally take 20 minutes. “Thank you to the mayor and vice mayor of Manila and the peripherals like the MMDA.”

The Philippine Daily Inquirer tried to call MMDA Chairman Francis Tolentino to get his side about the netizens’ complaints. But calls and a text went unanswered.

In radio interviews early Monday morning, however, Tolentino explained that he asked the Department of Education to suspend the classes to avoid students being stranded.

“If we did not suspend the classes, our students might not find a ride going home later in the afternoon,” Tolentino said.

Charlie Nozares of the MMDA Metrobase said the INC event brought the traffic on EDSA from Quezon Avenue to Buedia Avenue to a crawl from 6:30 a.m. to 11 a.m. as motorists searched for suitable alternate routes going to Quezon City and Manila.