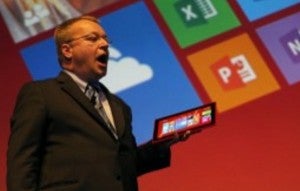 ABU DHABI — Nokia, whose handset division is to be acquired by Microsoft, launched its first-ever tablet computer in Abu Dhabi on Tuesday.

The Nokia Lumia 2520, available in red and white in a glossy finish as well as cyan and black in a matte finish, is to go on sale in the United States at an estimated price of $499 by the end of the year.

“Initial roll out is to begin broadly in the US as well as the UK and Finland, with additional countries to follow shortly after,” the company said in a statement.

“The award winning design, the breakthrough imaging innovation, and the new experiences that we have brought to you with the Lumia smartphones we are bringing them to the tablet,” Stephen Elop, executive vice president at Nokia Devices & Services, told reporters.

The device has a 6.7 MegaPixel camera and Zeiss optics.

The Nokia Lumia 1520 “delivers a brilliant image experience,” said Elop. “It has optical image stabilization. It has the latest technology to capture more details in every picture you take.”

Microsoft, which is trying to refocus the company around “devices and services” after missing the transition to mobile computing, announced in September it will buy Nokia’s mobile phone division.

The deal worth $7.2 billion gives Microsoft Nokia’s mobile phone operations along with an array of patents and licenses to help compete with rivals Google and Apple, as well as Samsung.

Later on Tuesday in San Francisco, Apple was expected to show off slick new iPads to take on rival tablet makers in the runup to end-of-year holidays.

Nokia pioneered the mobile phone and dominated the market for 14 years, until it was overtaken by South Korea’s Samsung in 2012 as the top-selling brand.

The company, long the pride of Finland, was blindsided by the shift to smartphones and struggled to fight off increasing competition from Apple’s iPhone and Samsung’s Galaxy.