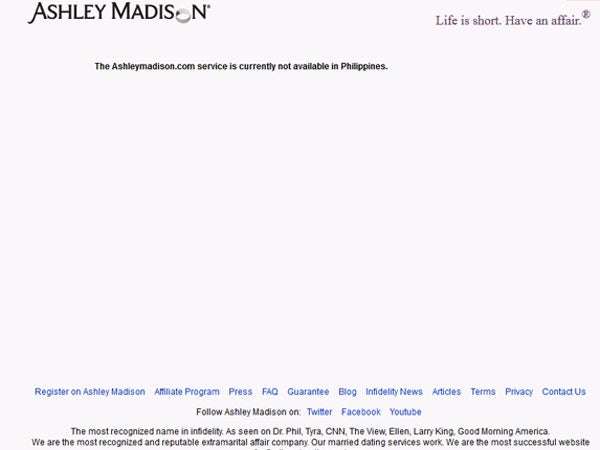 SINGAPORE – The Singapore expansion plans of an international dating service promoting adultery has ignited a social media protest and a sharp rebuke Friday from the city-state’s social affairs minister.

Local media earlier this week reported that Ashley Madison, which offers a discreet dating service for those looking to have affairs, was planning a Singapore launch next year, sparking a Facebook petition that has drawn over 11,000 people so far.

The Canada-based website, which boasts more than 20 million users in more than 15 countries and is infamous for its slogan “Life is short. Have an affair”, has been aggressively expanding in Asia, with recent launches in Japan, India and Hong Kong.

“I do not welcome such a website into Singapore. I’m against any company or website that harms marriage,” Chan Chun Sing, Singapore’s Minister for Social and Family Development, said in a Facebook post on Friday.

“Promoting infidelity undermines trust and commitment between a husband and wife, which are core to marriage,” he said in a post he said was in response to media reports of the planned Singapore launch.

“Our marriage vows make it clear that marriage is a lifelong commitment between a man and a woman. This includes staying faithful to one another.”

Elsewhere on social media, more than 11,000 people have liked the Facebook page “Block Ashley Madison – Singapore” since it was launched on Wednesday.

A description of the page states that it is a “petition that aims to gather sound-minded people to express our objection to the establishment of the shameless company – Ashley Madison,  that thrives on shattered marriages, in Singapore”.

“We need to send a message to the international business community that while we are happy to have foreign investors build businesses here, companies that promote such anti-family values are not welcome here,” wrote Facebook user Joelle Kong on the page.

Singapore has long been perceived as a conservative, and even prudish society, but an increasingly Westernized young populace and an influx of expatriates is slowly shedding that image.

Singaporeans remain mired with the reputation of being some of the least active lovers in the world, regularly ranking lowly in informal surveys of sexual frequency and satisfaction by British condom manufacturer Durex.