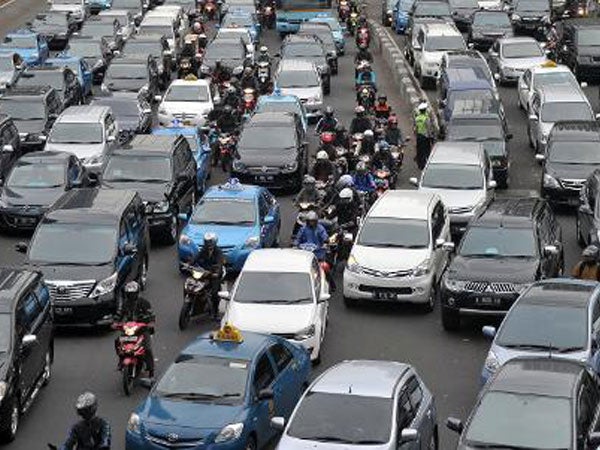 Motorists are trapped in the rush-hour gridlock in Jakarta, on October 21, 2013. AFP

JAKARTA—Fed up with spending hours stuck in the gridlocked Indonesian capital Jakarta, hundreds of thousands of social media-savvy commuters are tweeting to beat the traffic.

The threadbare public transport system in the capital of Southeast Asia’s biggest economy, combined with growing spending power, has spawned vast numbers of motorists who are increasingly turning to Twitter to conquer jams.

Road users in Jakarta, the world’s most active city in terms of posted tweets, are using the microblogging service to warn fellow travellers of traffic-choked roads or arrange car pooling.

Resorting to the web is an act of desperation for drivers in the megacity of 10 million, branded the world’s most unpleasant place to commute in a 2011 survey by consultancy Frost and Sullivan.

Hendry Soelistyo was an early pioneer of online tools to tackle traffic in Jakarta, where commuters often spend up to five hours a day in a slow-moving sea of cars and motorbikes to get to work.

Lewatmana, which means “via where” in Indonesian, mainly provides information about jams, but also flags up flooded roads or areas affected by the city’s frequent demonstrations.

The platform relies on its users as well as 100 CCTV cameras installed in office windows across the city to monitor traffic and send out pictures via Twitter.

Another attempt to solve Jakarta’s traffic woes through Twitter is a car-pooling community called Nebengers, which translates as “hitchhikers” and aims to reduce the number of vehicles in the city centre.

“Nebengers is like a virtual car terminal, where we can hitch a ride to go to school or the office,” said founder Andreas Aditya Swasti, 27.

It is rare to give lifts to strangers in Indonesia but Nebengers has still drawn around 4,000 Twitter followers, with more than 400 people using the service every day to either get or give a lift.

People wishing to offer a seat in their car to others who share the same route put a message out two hours before the trip.

Ratna Mayasari, who works in the city centre and offers free lifts from her house in South Jakarta, said it helps to share her one-and-a-half hour commute with others.

“Before, I used to sing or even grumble at the traffic by myself, but now I have found friends to do that with me,” she said.

With a dilapidated public transport system incapable of serving the city’s population and huge volumes of new cars and motorbikes hitting the streets every day, Jakarta needs all the help it can get when it comes to traffic management.

Between 2000 and 2010, the number of motorbikes on the streets increased by 460 percent and the number of cars by 160 percent, according to the Japan International Cooperation Agency.

The agency, a state-funded body that gives out Japanese government aid and advice, is helping Jakarta fix its traffic woes.

Attempts by city authorities to reduce the number of vehicles, such as doubling the parking price, have largely proved ineffective. The latest initiative has seen officials deployed to let down the tyres of illegally parked cars and motorbikes.

Public transport, which mostly consists of run-down buses belching toxic black smoke and overloaded trains and minibuses, has proved an unattractive option for a fast-growing middle class that can now afford cars.

New mass transit projects — which have been delayed for decades — are slowly springing back to life, with ground-breaking ceremonies for both the city’s first subway and monorail taking place this month.

But with several years before these are up and running, Jakarta’s tweeters could find themselves managing the city’s chaotic roads for some time yet.

“Where else can you find citizens busying themselves with traffic management? Indonesia is probably the most active, because in other countries, it’s the government who is doing this stuff,” said Soelistyo.