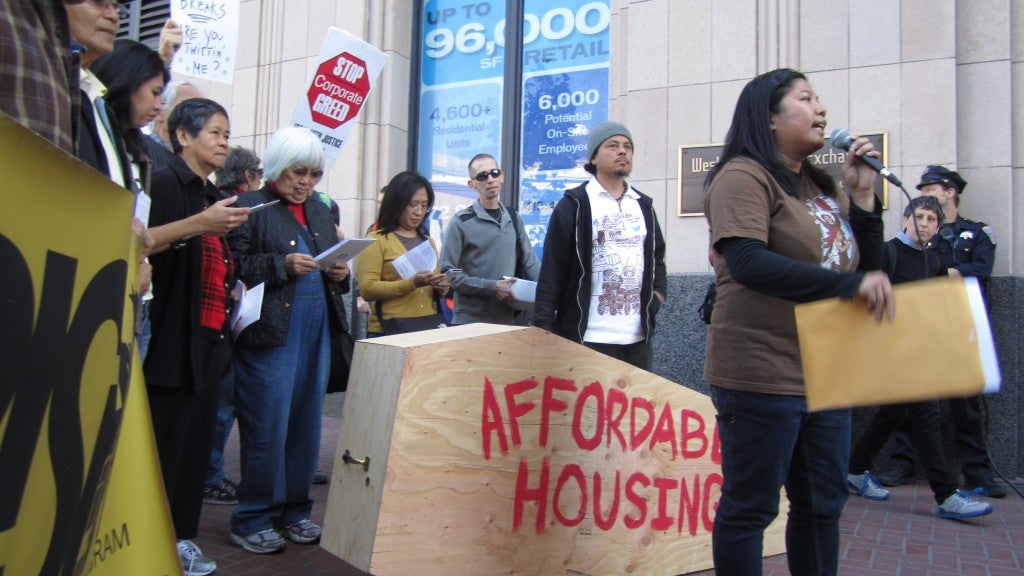 SAN FRANCISCO—On the same day that Twitter went public, about 200 protesters staged a rally in front of the social media giant’s corporate headquarters in downtown San Francisco to protest the increased evictions of low-income renters resulting from the new high tech boom.

The protesters, among them members of the Filipino-American nonprofit Manilatown Heritage Foundation, denounced Twitter, other tech companies and the city of San Francisco for displacing low-income, immigrant and elderly residents.

Manilatown Heritage Foundation last week declined to receive an award from San Francisco officials on the occasion of Filipino American Heritage Month to protest the wave of evictions that has hit the city.

Manilatown Heritage Foundation board member Tony Robles, who was at the protest rally, said, “Elders are being lied to, and intimidated out of their rent control apartments.” 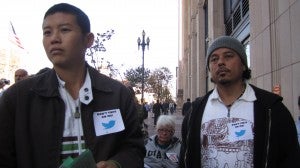 Tenant rights advocates say real estate speculation in San Francisco is triggering the highest rate of evictions the city has seen in 12 years, partly because of the influx of highly paid tech workers.

A similar trend is evident in the rental market, as more high-end rental properties are built to accommodate the wealthier new residents.

“The way this affects Filipinos is you have a company here that employs people making in excess of $100,000 a year. They’re building  (apartment buildings) right across Twitter (where) a one-bedroom rents for more than $3,000 a month,” explained Robles. “The (new apartment buildings) have some inclusionary low-income units, but not really enough to accommodate the regular people. What happening here is that immigrant folks and their families are having to move.”

The area where Twitter is located, the Mid-Market, also referred to as the South of Market, has been an enclave for low-income, new Filipino immigrants. 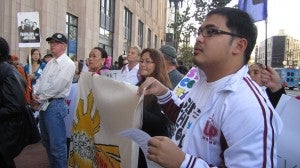 “The city government is giving tax breaks to Twitter, and we know they’re making a lot of money,” said Jeremias David, a member of the National Alliance for Filipino Concerns, who attended the rally. “We also know that families in San Francisco are struggling. There’s no affordable housing. Giving tax breaks to Twitter does not represent their concern for the people.”

“The mayor and board of supervisors realized the existing tax structure taxed job creation, so to keep startups like ours in the city, they created a limited exemption for the Mid-Market zone,” a spokesperson for Twitter told the New York Times last week.

Erasing the legacy of Filipino seniors

Manilatown Heritage Foundation is known for fighting the eviction of elderly Filipino tenants of the International Hotel in 1977.

“One of the reasons we have rent control is because of what happened in Manilatown. (With the rise of evictions and gentrification) they are erasing the history, the legacy of Manilatown, of the manongs and manangs,” said Robles.

“We’re trying to honor the people who came before,” said Robles, which is also why the organization turned down an honor from District Supervisor David Chiu on Filipino American Heritage Month.

In a statement after the snub by Manilatown Heritage Foundation, Chiu’s office said: “(Chiu) agrees that protecting tenants from displacement should be a top priority, and that’s why he has worked hard to pass legislation to put a moratorium on condo conversions and to make it easier for tenants to apply for rent increase exemptions at the Rent Board. He has also introduced legislation to ensure that tenants who get evicted because of the Ellis Act do not become homeless by giving them a priority in affordable housing projects.”

Chiu’s office instead conferred the honor instead to Filipino youth leader Genevieve Jopanda, for her work to combat Hepatitis B in Chinatown.

“Filipino American History Month in October is a celebration of the contributions of individuals and organizations to the fabric of America. It is unfortunate that Manilatown, a very prominent organization in District 3, used (the celebration of Filipino American History Month) to voice their opinion on the current housing issues in San Francisco,” said Jopanda. “(But) I respect their voice and applaud their courage,” she added.

Robles said his organization plans to be involved in a tenant campaign to strengthen laws to protect rent control laws, along with a coalition called “Eviction Free San Francisco.”