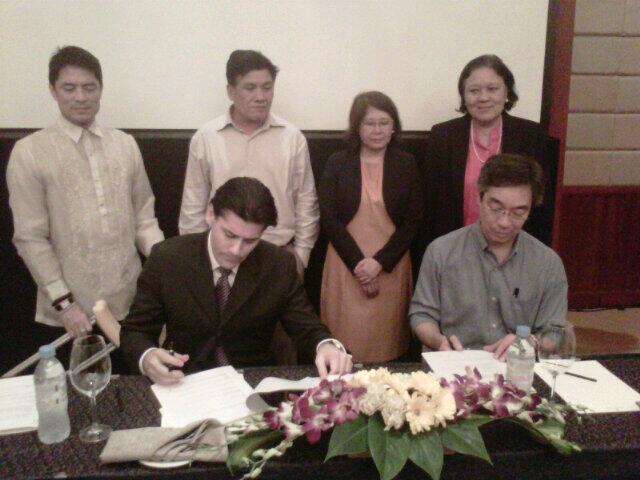 Officials sign a partnership between Janssen and the University of the Philippines National Institute of Health (UP-NIH) and the Foundation for the Advancement of Clinical Epidemiology, Inc. (FACE, Inc.) for the country’s first mental health information system.

The creation of an information system was prompted by a campaign of Janssen Pharmaceutical Companies of Johnson and Johnson “Into the Light project.  The project aims to eliminate stigma against mental illness by promoting awareness and understanding on its implications to individuals, communities, and on a national-scale.

A partnership between Janssen and the University of the Philippines National Institute of Health (UP-NIH) and the Foundation for the Advancement of Clinical Epidemiology, Inc. (FACE, Inc.) was made to pioneer the country’s mental health information system.

“There is a vicious cycle between poverty and mental illness. The rate of mental disorders and the need for care is highest among disadvantaged people yet with the lowest access to appropriate services,” said Dr. Michael Sionzon, Consultant Department of Psychiatry at the Philippine General Hospital, citing that only 4.1 percent of the government’s national budget is allocated to health expenditures.

“Poverty causes mental illness and mental illness drifts down families in the social strata but the government cannot see this occurrence,” Sionzon said.

Professor Maria Lourdes Amarillo, project leader for mental health information system, said the identification of the magnitude of the problem is the first step to end stigma against mental illness.

“The creation of effective solutions to address the needs of mental illness patients on a large scale begins with the collation of reliable baseline data,” Amarillo said.

The data gathered, according to Amarillo, will generate information that is useful in planning, programming, policy and decision-making that will help the government to focus on outcomes-based medication and treatment of patients as well proper information to their families and caregivers.

Dr.  Jacinto Blas Mantaring III, President of FACE, Inc. cleared the issue on ethical concerns and data privacy. Mantaring said privacy of data gathered and consent on the part of patients and their families will be assured.

The information system, which targets a completion in April 2014, will pilot in ten initial sites in the country in May.

“The group’s technical team is still identifying our partner hospitals where we will start this project and since this is a grant project, Janssen will finance this program,” Sionzon said.

When asked about the group’s longer term goals, Sionzon said, “We hope for an increased national priority for the coverage of medication and in-patient services, the provision of psychosocial therapy and other mental health services and more opportunities during the recovery phase, which is prior to reintegration to society and workforce.”

Sianzon stressed that media plays a crucial role in bringing this awareness to the consciousness of the public.

Sionzon added that they would continue to pursue bringing conversations on mental health to the mainstream, and break the bonds of discrimination and stigma.

The event kicked off with the signing of grant contract from Janssen Pharmaceutical Companies of Johnson and Johnson received by the UP-NIH and FACE, Inc.

Mentally disabled, but not crazy