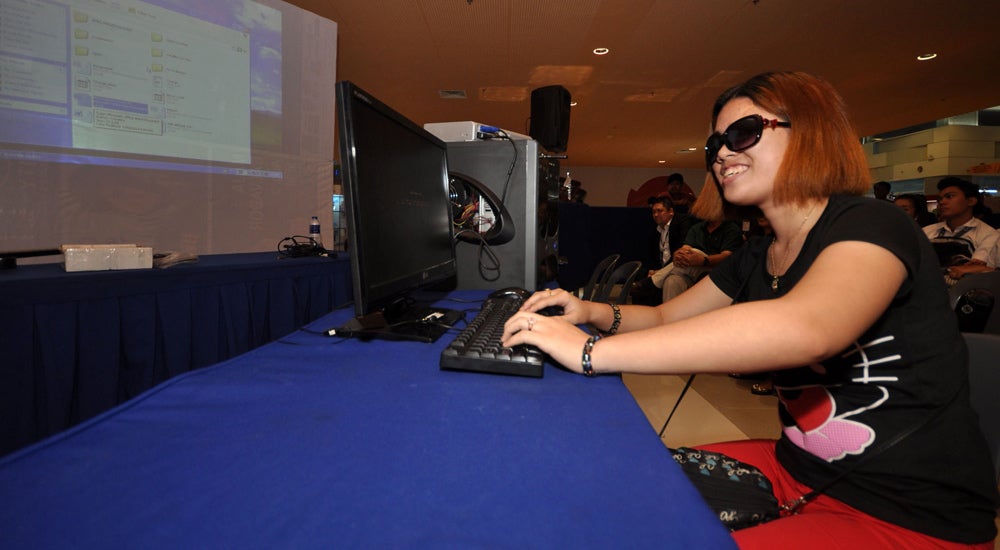 COMPUTER TALKS Crisanta Marcelino, 18, a visually impaired Information Technology student in Dagupan City, demonstrates the use of a screen reader software in a forum at SM Rosales on Saturday. Marcelino can now Google her assignments, instead of having to look them up on thick Braille books. INQSnap this page (not just the logo) to view more photos. WILLIE LOMIBAO/INQUIRER NORTHERN LUZON

DAGUPAN CITY, Philippines—Crisanta Marcelino, an 18-year-old blind student, used to do research for her assignments by sifting through thick Braille books in her school library.

Aside from having to spend hours reading the Braille pages for her assignments as an Information Technology (IT) student in a private school here, she also had a hard time looking for the right books to read.

Today, she does her research on the Internet, thanks to a screen reader software that has been installed on the computers of the Area 1 Vocational Rehabilitation Center (AVRC) here.

According to the National Statistics Office’s (NSO) 2010 Census of Population and Housing, more than 1.44 million (1.57 percent) of the country’s then 92.1-million population had various forms of disability. A 2002 country profile drawn up by the Japan International Cooperation Agency (Jica) cited a 1996 NSO census report which estimated that 46 percent of Filipino PWDs were blind.

The AVRC, an attached agency of the Department of Social Welfare and Development, caters to persons with disability (PWD) from the Ilocos, Cagayan Valley, Central Luzon and Cordillera regions.

“We are really very happy that we have this software. Before, we could not use our computers and we envied our classmates who had normal vision,” Marcelino said.

The software was introduced on Saturday in a forum participated in by IT students and businessmen at the SM City in Rosales, Pangasinan.

“The screen reader allows the computer to talk. So visually impaired persons no longer need a monitor and a mouse. All they need is a CPU (central processing unit), a keyboard that serves as their mouse and a speaker or headset,” Garcia said.

The students, she said, first trains on how to use the keyboard and its shortcut keys. After that, they are introduced to different software, including word processing, spreadsheet and slide presentation software.

Marcelino said that for two weeks, she had to work hard to understand the American accent of the voice in the software.

“I had a hard time understanding it, especially when it reads Filipino. But now, I’m so used to it and I can understand whatever it says,” Marcelino said.

Garcia said the only hitch in the screen reader software is its cost, which is around P48,000.

But she said there was a Linux-based free software, called nonvisual desktop access (NVDA), that can be downloaded from the Internet.

“But unlike Jaws, which is more user-friendly, the NVDA has limitations. The voice especially is irritating to the ear,” Garcia said.

She said most of the AVRC computers had the NVDA software.

Jersey Mendoza, SM City Rosales manager, said they hosted the forum hoping it would open up opportunities for PWDs, especially the blind.

“In our malls are Internet shops. One way of starting with this is to orient our tenants that there is this software, so that maybe they could allot a slot for PWDs in their Internet cafes,” Mendoza said.