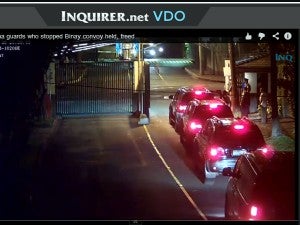 The video provoked anger and dismay among netizens, many of them saying the incident showed the “arrogance” of the Makati mayor and his sister Sen. Nancy Binay, who was also on the video. The two officials are children of Vice President Jejomar Binay.

“The #binay siblings should take a crash course on humility. Being a public servant doesn’t mean you can do anything to your begging,” netizen @chinkit said on Twitter.

“To be a good leader you need to be a good follower,” netizen Alvin Celestial Apostol posted on the Inquirer Facebook.

“They apparently think they are the law. Ngek!” said netizen @beautycocoon.

“What can I say? They’re Binays,” said netizen @RoadieFernandez.

“In Canada where I live now, the laws are obeyed. There should not be any discussion whatsoever. They are not allowed to enter, they turn their backs and there is no need for discussion. Power goes to their head, these politicians who are arrogant and believe nobody should disobey them,” netizen esgstar posted on Inquirer Facebook.

An Inquirer source said Binay also ordered the arrest of the three village guards for refusing Binay’s convoy access to the gate because of the village’s security rules. The Makati police chief had denied this, saying the guards voluntarily joined the police to the station.

“Wow good job Mayor Binay. So because guards don’t let you pass through a restricted gate you have them arrested? Wow,” said netizen @ginoboi.

“I can buy you, your guards, and this village!” said netizen @ANDREWdecastro, parodying the infamous quote made by actress Anne Curtis in a drunken fit.

Others praised the guards for standing their ground.

Others couldn’t help but poke fun at the Jojo Binay-Mar Roxas rivalry, a throwback to the 2010 elections where now Interior Secretary Mar Roxas lost to Jojo Binay, the mayor’s father.

Vice President Binay’s supposed plan to run for President in 2016 was not spared from the online brickbats.

A netizen said the Binays could learn a lesson or two from actress Anne Curtis who apologized after it was reported on social media that she slapped show-biz colleagues after she had one too many.

“I think @annecurtissmith would have handled the #binay incident better. She certainly did with her club thing. She apologized, then moved on,” netizen @kutitots said.—Ramon H. Royandoyan

Only 3 of 4 NAIA terminals to operate