The Esturya for Kids app on iTunes store 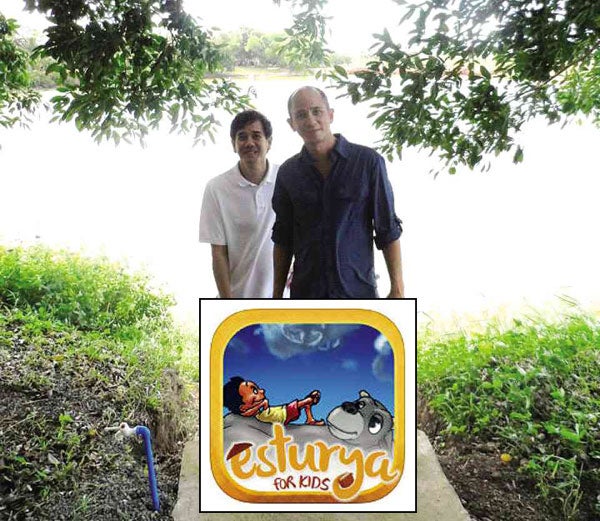 BROTHERS Robin (left) and Jay Abello, the inventors of Esturya for Kids app (below). CONTRIBUTED PHOTO

The app for iPads was created by brothers Robin and Jay Abello of Negros Occidental. Robin, 43, is a software expert based in the state of Maryland, USA, while Jay, 42, is a filmmaker based in the Philippines.

The “Esturya for Kids” app that makes learning fun for 6- to 8-year-old children features the story of “Cowboy Inting and the Carabao Butud,” written by Negrense actor and writer Dwight Gaston, Robin said in an e-mail interview.

“The idea of the app came about last June when I was thinking of writing an app for our kids,” said Robin, who has three children aged 4 to 10 years, who live in the United States.

“I thought, why not write a language app that can help our kids learn Ilonggo. So I discussed it with Jay and he loved the idea and we collaborated on it,” he said.

Jay, who travels between Bacolod and Manila, brought in everyone to the creative side—from Dwight Gaston, who did the story and the illustrations, to many other members of his team from Seventh Films, which did the editing and voice and sound recordings, Robin explained.

Robin said the team from his firm called Akubo did the software and the graphic design for the app.

“The app is designed to work on an iPad. We are releasing it in Ilonggo and we hope to add Tagalog and Cebuano translations early next year. And we’re looking into adding other stories, hopefully by other Negrense writers as well,” Robin said.

“As you’re reading the story in English, some words change to Ilonggo as you move up levels and, on level 4, the entire story is in Ilonggo. You can touch the Ilonggo word and hear its translation in English,” he added.

Robin said the website for the Esturya for Kids app is www.esturya.com.