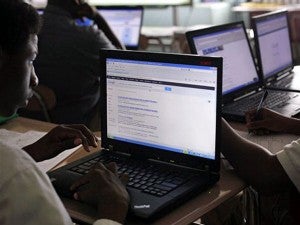 Students use computers to perform research during an Advanced Placement government class at the Academy for College and Career Exploration in Baltimore. The United States is set to be overtaken by China, which has the second-highest commercial losses from software piracy—at $9 billion—even as the legal US software market remains many times bigger than in China. AP FILE PHOTO

MANILA, Philippines – In line with its commitment to combat the use of unlicensed software in the country, the Pilipinas Anti-Piracy Team (PAPT) led by the Intellectual Property Office of the Philippines (IPOPHL), Philippine National Police (PNP), Optical Media Board (OMB) and the National Bureau of Investigation (NBI), recently conducted 15 crackdown operations across Metro Manila, Pampanga and Bulacan and found 10 businesses using unauthorized software.

Twenty-one sacks of assorted pirated CDs including various versions of Microsoft Windows operating systems, Microsoft Office, Xbox games and assorted software installers were discovered during the crackdown. Upon inspection, PAPT required these businesses to show proof of compliance but none were able to do so.

The PAPT has increased the frequency of inspections to strongly reinforce the use of legal software in many industries. In the coming weeks, PAPT will double the number of its reinforcement activities to further ensure that organizations in the country are only using genuine software.

“Piracy breeds across industries and it is not surprising that even some schools were found to be using unlicensed software,” said IPOPHL Director General Ricardo Blancaflor. “Aside from inspections, we are intensifying our efforts on information and education campaigns to build awareness on the detrimental effects of using illegal software such as malware occurrence and disruption in business operations. Organizations should realize that these damages can lead to heavier costs than what investing in genuine software requires.”

The PAPT, formed in 2005, is comprised of the National Bureau of Investigation, OMB, Philippine National Police and the IPOPHL, which joined the group in 2011. Its aim is to undertake an integrated and coordinated effort by the government to counteract the negative effects of software piracy on the local IT industry and the economy.