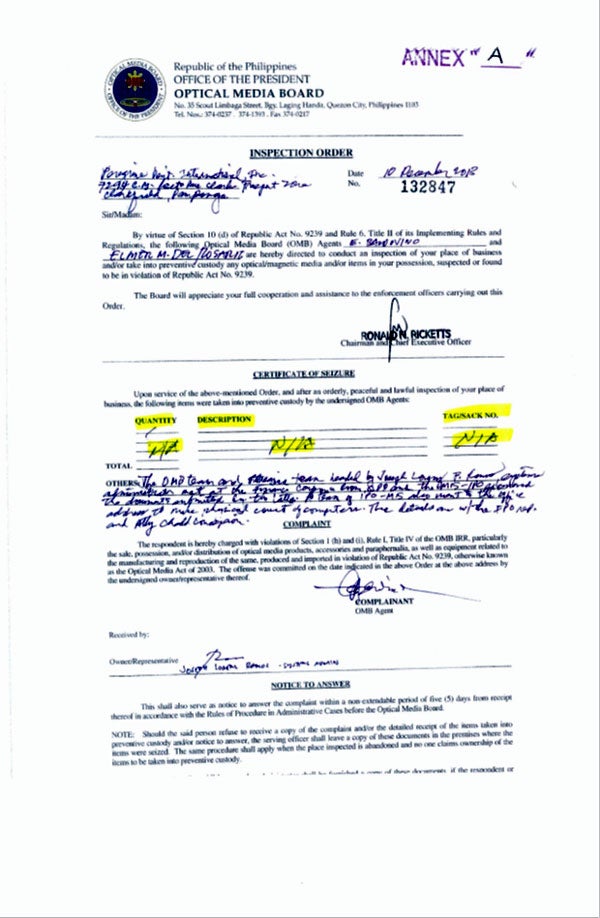 MANILA, Philippines – One of the companies allegedly identified by a local team combatting software piracy in the country denied its use of unauthorized software.

In a letter to INQUIRER.net dated Jan. 10, 2014, Wade J. Cason, Peregrine Development International Inc. vice president and chief technology officer, said: “Contrary to what has been published, Peregrine does not use unauthorized software.”

Cason cited that in the “Certificate of Seizure” that was issued to the company by agents of the Optical Media Board (OMB) which conducted an inspection in the presence of representatives of the Intellectual Property Office of the Philippines (IPOHL), an OMB agent noted “N/A” because “no illegal software was seized from us and we have satisfactorily presented all our licenses and invoices to them”.

Quoting from Attorney Anthony Chadd Concepcion, OMB consultant, Cason said that the document, a copy of which was sent to INQUIRER.net, was OMB’s “standard template” and that “this does not mean that the company was being charged with violations of RA 9239 because the notations in the Certificate of Seizure would prove otherwise”.

Cason added that proof that Peregrine has been “compliant with the law” was when Martin San Pedro from the Business Software Alliance (BSA) and IPOHL representative, told Joseph Lorenz Ramos, Peregrine’s Systems Administrator, that the company would be recommended as “role model for Software License Management”.

Peregrine was among 10 businesses identified by the Pilipinas Anti-Piracy Team (PAPT) as having allegedly used unauthorized software.

The OMB and IPOHL are two of the agencies involved in crackdown operations, along with the Philippine National Police and the National Bureau of Investigation.