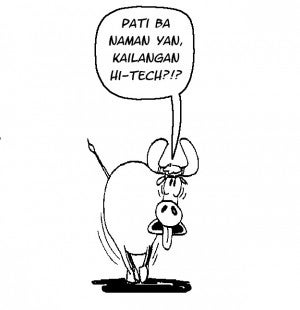 TOKYO—Japanese researchers on Monday unveiled a disposable organic sensor that can be embedded in a diaper and wirelessly let a caregiver know a baby or a senior citizen needs changing.

They said the sensor could potentially be manufactured for a few US cents.

The system, which uses organic materials that can be printed with inkjet technology, was developed by a team led by professors Takayasu Sakurai and Takao Someya at the University of Tokyo.

The technology can be applied not only to infants’ diapers but also to adult nappies—a big-seller in rapidly aging Japan.

Regular diapers change color to indicate they are wet, but a caregiver still needs to take off the wearer’s clothes to see.

“If sensing is done electronically, you can tell simply by coming close to the wearer—without unclothing him or her,” Someya said.

The technology could also be put directly on the skin like a plaster, in place of often ring-shaped devices currently used in hospitals to monitor pulse and blood oxygen levels, the researcher said.

Healthcare sensors often use silicon and other relatively rigid materials that can cause their users discomfort.

The flexibility of a single sheet of plastic film reduces discomfort for wearers and means it can be applied to a larger number of places—offering greater potential for doctors or caregivers in monitoring well-being.

The prototype system that has been developed is capable of monitoring wetness, pressure, temperature and other phenomena that cause a change in electrical resistance, Someya said.

His research team, however, would like to refine the sensor to reduce its power consumption before it goes into widespread use.

Currently the data-reading device needs to be a few centimeters (inches) from the sensor, but Someya said the team was exploring how practical this was and whether the distance could still be boosted.

Researchers are to unveil their work at an academic gathering now under way in San Francisco.