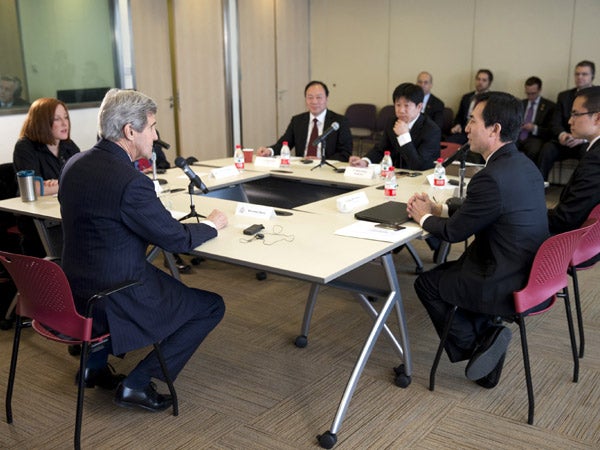 BEIJING — Chinese bloggers urged US Secretary of State John Kerry to push for greater freedom online in China during a rare meeting in Beijing Saturday, asking for help to “tear down the great Internet firewall”.

The roundtable discussion, organized by the US Embassy, was a unique opportunity for the top diplomat to hear directly from China’s bloggers amid reports that Beijing is stepping up its efforts to clamp down on political dissent.

The meeting came a day after Kerry held talks with senior Chinese leaders including President Xi Jinping and Foreign Minister Wang Yi, during which he called on Communist Party authorities to improve their human rights record.

Zhang Jialong, a reporter at Tencent Finance who was one of four bloggers taking part in the discussion, urged the United States to support “Chinese who aspire for freedom” and help “tear down the great Internet firewall”.

Zhang also accused US companies of helping China block access to social networking sites such as Twitter and the Internet in general.

Kerry said he had not heard of such moves, but promised he would check.

In the 40-minute meeting, Kerry also heard from Ma Xiaolin, a former journalist at Chinese state news agency Xinhua, who said that the Internet was his main form of communication.

He complained about the limits on Internet freedom in China, and urged Washington to use its sway to ease the squeeze.

Kerry told reporters Friday that in his discussions with the Chinese leadership he had a “frank discussion about some human rights challenges… and the free flow of information in a robust, civil society” which included some of “the challenges of the cyber world that we live in today”.

“I emphasized that respect for human rights and for the exchange of information in a free manner contributes to the strength of a society in a country,” he told reporters after his meetings in Beijing.

The rising influence of microblogs has been accompanied by the emergence of celebrity users with verified accounts, known as “Big Vs”.

Wang Keqin, who was fired from his job at the Economic Observer last year after he reported on the cause of flash floods that hit Beijing in 2012, said at times he believed he had a price on his head for his work as an investigative reporter.

Internet freedom “was going backward, there is less of it”, he told Kerry.

China’s ruling party, which has provided more room for public debate in recent decades, has long been engaged in a “cat and mouse” game with Internet users, tightening restrictions in periodic crackdowns before new forums emerge to challenge such restraints.

And the rising popularity of microblogs such as Sina Weibo has triggered a government-backed campaign to assert greater control over social media.

Last year Chinese-American investor Charles Xue, who had more than 12 million followers on his microblog which was heavily critical of the government, was arrested on charges of soliciting prostitutes.

State media insisted at the time that his arrest had no connection with his online presence, but government-run broadcaster CCTV showed him in prison clothes while under detention, confessing that he had used microblogging to “gratify my vanity”.

Kerry also visited a joint venture between Indiana-based Cummins and China’s Foton company producing diesel engines which produce fewer emissions in Beijing, before then heading to Jakarta on the next leg of his Asia trip.