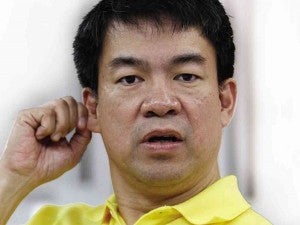 Sen. Aquilino “Koko” Pimentel III on Friday called on the Commission on Elections (Comelec) to discard the precinct count optical scan (PCOS) machines used in the past two national and local elections, and look for newer and more reliable technology for the 2016 polls.

Pimentel, chair of the Senate committee on electoral reforms, expressed support for the Comelec’s plan to sell the old PCOS machines used in the 2010 and 2013 elections.

He said the machines fell short of the specified minimum accuracy rate of 99.995 percent, or a maximum error rate of 0.005 percent, when a series of tests were conducted to determine their accuracy.

“Accuracy should never be sacrificed to ensure clean, honest and credible elections. Elections are only democratic if they are truly free and fair,” Pimentel said in a statement.

Pimentel also cited the technical glitches that marked the use of PCOS machines during the midterm polls in 2013.

“Questionable accuracy has a bearing in hotly contested local races where the disputed position is determined by only a few votes and even in the neck-and-neck battle for the remaining slots in the senatorial contest,” Pimentel said.

Pimentel said some PCOS machines were found to be defective and that flaws and vulnerabilities in the country’s automated elections should be addressed to protect the next elections from sabotage or attempts to favor a candidate.

Pimentel doubted the condition of the used machines because of wear and tear, adding that “some units were found to be producing “black lines” on the ballots during a random manual audit after the May 2013 polls.”

The Comelec, according to Pimentel, is considering the use of direct recording electronic technology, “which is akin to touchscreen technology where voters cast their votes by picking candidates from a touchscreen.”

My job is to be suspicious of PCOS, says Koko Pimentel

AFP gets P183M in war materiel from US